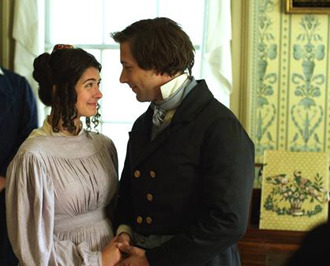 Three weeks ago, the musical score for "Joseph Smith and the Golden Plates" wasn't even started. The crew was still filming the movie on Jan. 8. Producer/director Christian Vuissa wasn't sure it would be ready in time for its premiere at the 2011 LDS Film Festival, which is Vuissa's baby.

The film was still on the computer the night it was scheduled to run. No matter, the film shown to the festival audience Saturday, Jan. 29, was a masterpiece, both in story and in rendition. "It's a little miracle that we got this film ready for tonight," Vuissa said as he addressed a packed house after the showing. "We're shooting another scene Monday."

Vuissa has done himself proud. He has also paid tremendous homage to the man regarded as the prophet who brought The Church of Jesus Christ back to the earth. "I wanted to create a personal Joseph Smith, someone relatable," Vuissa said after the screening.