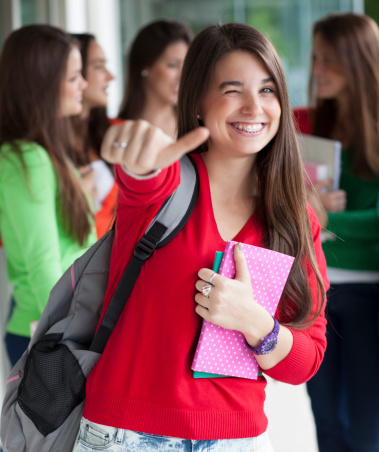 A study conducted by the Utah Department of Health in 2013 and published in this month's Utah Health Status Update revealed a few things about teen suicide rates that Latter-day Saints might find particularly interesting: parental education levels, family togetherness, and weekly religious attendance all contributed to a lower risk of teen suicide. And bullying and overuse of electronics lead to higher risk.

All these factors are also things modern-day prophets have advised Latter-day Saints on.

Church leaders have continued to advise us to get an education. The Lord even explained the importance of a good education to Joseph Smith in Doctrine & Covenants 130: "Whatever principle of intelligence we attain unto in this life, it will rise with us in the resurrection."

The Utah teen health study outlines a specific benefit that a parent's education can have on their child's life: "Students who lived with adults who had not graduated from high school had a significantly higher rate of suicide ideation compared to those whose parents had completed high school (20.6% vs. 16.8%, respectively). Those whose parents had graduated from college had lower rates of suicide ideation."

The For the Strength of Youth pamphlet echoes this finding when it says, "Education will prepare you for greater service in the world and in the Church. It will help you better provide for yourself, your family, and those in need. It will also help you be a wise counselor and companion to your future spouse and an informed and effective teacher of your future children."

Eat Meals Together as a Family

In his iconic "Good, Better, Best" address, Elder Dallin H. Oaks shared, "The number of those who report that their 'whole family usually eats dinner together' has declined 33%. This is most concerning because the time a family spends together 'eating meals at home [is] the strongest predictor of children’s academic achievement and psychological adjustment.' Family mealtimes have also been shown to be a strong bulwark against children’s smoking, drinking, or using drugs. There is inspired wisdom in this advice to parents: what your children really want for dinner is you."

The Utah Health study corroborated this inspired wisdom. It found that "students who ate a meal with their family five or more days in a typical week (61.1% of respondents) were half as likely to consider suicide. Students who had experienced an episode of depressive symptoms in the past year also benefitted from family mealtimes, as they were still less likely to have considered suicide in the past year."

Making an effort to attend Church meetings is part of temple worthiness. In a 2010 general conference address, President Dieter F. Uchtdorf explained why this is so important. "I understand that, at times, some may wonder why they attend Church meetings or why it is so important to read the scriptures regularly or pray to our Heavenly Father daily. Here is my answer: You do these things because they are part of God’s path for you. And that path will take you to your 'happily ever after' destination."

Indeed, attending Church with your youth was shown to keep teen suicide at bay--by 50% according to this most recent study: "Those who attended religious services or activities once a week or more (60.4% of sample) were half as likely to have considered suicide."

Additionally, the study found that "even among those who had experienced an episode of depressive symptoms (two or more weeks of feeling sad or hopeless to the point where it interfered with their usual activities) in the previous year (20.8% of the sample), religious involvement was still protective."

When It Comes to Bullying: Stop It

We should always strive to represent Christ with our actions, and leaders have specifically spoken out against bullying in all its forms:

This issue is about more than just emotional health--it's also about physical safety.

Avoid Excessive Use of Electronics

Elder Bednar raised an apostolic voice of warning concerning overuse of technology and use of the wrong technologies:

Specifically, the study found what Elder Bednar's message states: even good technology can be bad if you overuse it.

"Overuse of electronics in general was also associated with higher odds of suicide ideation; those who used video games or computers for non-school-related activities (social media, etc.) for three or more hours per day (24.8% of respondents) were about twice as likely to have seriously considered suicide in the past year compared to those who had two or fewer hours of screen time daily."

It is amazing to see how following the direction of living prophets and apostles can lead us to happiness—even when we didn't know how far-reaching their effects would be.

The study, which is conducted biennially in odd-numbered years, looks at junior, middle, and high school students and assesses their health-related behaviors. The cited analysis is based on data from 33,214 respondents in 8th, 10th, and 12th grade.