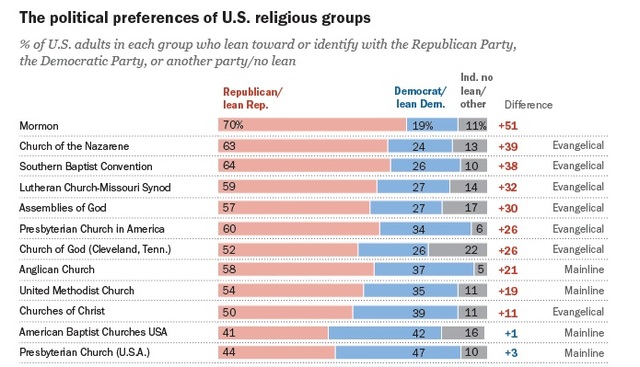 New Study: Mormons Are the Most Republican of Any Religion

While Mormons might be the most Republican-leaning religious group in America, we are not the religion with the most unified political view. That's why it's important to remember that the Church does not take a stance when it comes to political parties, and there's room within our Church for those with differing opinions, whether in politics or other areas of life.

Mormons are the most heavily Republican-leaning religious group in the U.S., while a pair of major historically black Protestant denominations – the African Methodist Episcopal (AME) Church and the National Baptist Convention – are two of the most reliably Democratic groups, according to data from Pew Research Center’s 2014 Religious Landscape Study.

Seven-in-ten U.S. Mormons identify with the Republican Party or say they lean toward the GOP, compared with 19% who identify as or lean Democratic – a difference of 51 percentage points. . . .

At the other end of the spectrum, an overwhelming majority of members of the AME Church (92%) identify with or lean toward the Democratic Party, while just 4% say they favor the Republican Party (an 88-point gap).