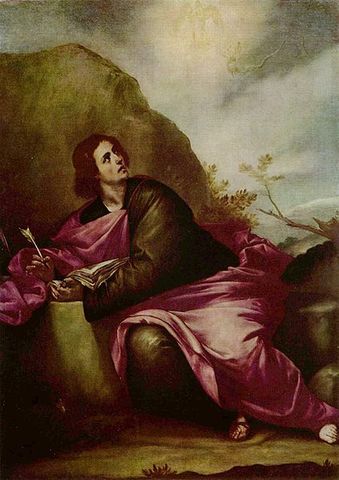 New Testament Lesson 45: "He That Overcometh Shall Inherit All Things"

INTRODUCTION:
One of the challenges of the book of Revelation is that the language is often strange and the images seem unfamiliar.  We have some difficulty in understanding what John is trying to convey to us.  There is a solution to this problem, and it is related to the problem of understanding the following transliteration from an ancient Greek text.

For about 98% of those who see this message, the meaning is invisible.  And yet, when they continue to look at it and to read it over and over, sometimes even reading  aloud to hear and experience the sounds of the language, the passage suddenly opens itself and its complexity becomes clear.  Try it yourself.  Read it over at least twice out loud, and have someone else nearby read it to you.  You will soon discover that the message is clear.

The book of Revelation is much the same.  The first time through the book, or through a section of the book, you may feel confused and unrewarded.  But as you look again and again, as you begin to isolate phrases and concepts whose meanings are clear, and then to link them together and to adjoining verses, you will suddenly discover that the book will open itself to you in a wonderful way.

By the way the “translation” of the text above is as follows: Oh, see Billy, see her go: forty busses in a row.  Oh no, Billy.  Them is trucks.  See what is in ‘em?  Cows and ducks.

Here are a few suggestions for you to consider as you study this book.  Don’t read Revelation.  See it. As much as possible, let the images stand by themselves.  Let them teach you.  Do not exhaust yourself trying to force meanings on the symbols.  Most of the time, the meaning is clear from the images themselves.  Joseph Smith said of this book: “The book of Revelation is one of the plainest books God ever caused to be written.” (Teachings of the Prophet Joseph Smith, p.290)

Speaking of this remarkable book of scripture, Elder McConkie said

“In my judgement the Gospel of John ranks far ahead of those of Matthew Mark, or Luke; at least John’s record of the life  of our Lord is directed to the saints; it deals more fully with those things that interest people who have received the gift of the Holy Ghost, who have the hope of eternal life.  But even ahead of his gospel account stands this wondrous work. the book of Revelation, or at least so it seems to those who are prepared to build on the foundations of the gospels and epistles and to go forward forever in perfecting their knowledge of the mysteries of the kingdom”  (Elder Bruce R. McConkie, Ensign, September 1975, p. 85).

Perhaps some background information will help a little. John, one of the original Twelve, was confined by Roman officials on the island of Patmos, a small protrusion of rock off the western coast of Turkey.  His offence was bearing testimony of Christ to a society more and more given to the cult of emperor worship.  Christians, because of their belief that Christ, not Caesar, was Lord, were facing increasing hostility.  While on Patmos, John wrote to the seven branches of the church in Asia.  Those letters are the book of Revelation.  The theme of the book is that eventually, the good guys will win.  Good will triumph over evil.  Christ will reign triumphantly on the earth and Babylon, the earthly kingdom of the devil, will fall.  By the way, about 20% of the book of Revelation is changed in the JST.  Be sure to check JST footnotes and the JST appendix for clarification.

The vision that begins this book starts with a voice.

“I was in the Spirit on the Lord's day, and heard behind me a great voice, as of a trumpet, Saying, I am Alpha and Omega, the first and the last: and, What thou seest, write in a book, and send it unto the seven churches which are in Asia; unto Ephesus, and unto Smyrna, and unto Pergamos, and unto Thyatira, and unto Sardis, and unto Philadelphia, and unto Laodicea” (Revelation 1:10,11).

When John turned to see the source of the voice, he saw seven golden candlesticks.  According to 1:20, these sources of light represent the seven churches.  Why are the candlesticks gold rather than pewter or brass or baked clay?   Why are they represented as candlesticks? What light does the church provide for the world?  Who does John see standing in the midst of the churches? (Rev. 1:13)  Can you see this image?  What is John trying to tell us about the church and its relationship to the Son of Man?  Read John’s description of Christ in Rev. 1:13-15.  What did the Lord have in his right hand? (Rev. 1:16)  According to Rev. 1:20, the stars are the angels of the seven churches.  According to JST footnote ‘a’ for 1:20, what are the angels?  They are the servants of the seven churches.  They are servants in the way that your bishop is a servant.  Christ said, “But he that is greatest among you shall be your servant.” (Matt. 23:11)

Don’t just read this: see it!  Christ stands in the midst of his church holding the leaders of the church in his right hand.  There is a beauty to this image that enlarges the soul and increases faith.  If we stay close to our leaders, who else will we be close to?  If we are active in the church, honoring our covenants and keeping the commandments, who will we be close to? Through what agency will the Savior make himself and his work know to the world?

II. THE LORD TELLS THE SEVEN BRANCHES IN ASIA ABOUT THE BLESSINGS PROMISED TO THOSE WHO OVERCOME.

The Lord now sends messages to the angels–the servants or leaders–of each of the seven churches.  To the members of each of these churches–these wards or branches–John writes some wonderful promises, promises made to those who overcome.

As you review these promises about overcoming from the book of Revelation, mark and make a list of all of them.  I think you will be amazed as I was at what the Lord promises to those who “overcome” the world.  [I have presented this information as a sort of “fill in the blank” scriptural review because the blanks offer the simplest way to emphasize the words that convey the power of the promises.]

“And by the river upon the bank thereof, on this side and on that side, shall grow all trees for meat, whose leaf shall not fade, neither shall the fruit thereof be consumed: it shall bring forth new fruit according to his months, because their waters they issued out of the sanctuary: and the fruit thereof shall be for meat, and the leaf thereof for medicine.”

These scriptures from Revelation 2 & 3, with the cross references noted, may give the best description of Godhood and of your eternal destiny available anywhere in the standard works. .  If you OVERCOME, you are promised:

D&C 109:77 tells of the kind of being who now sits enthroned in heaven:

“O Lord God Almighty, hear us in these our petitions, and answer us from heaven, thy holy habitation, where thou sittest enthroned, with glory, honor, power, majesty, might, dominion, truth, justice, judgment, mercy, and an infinity of fulness, from everlasting to everlasting” (D&C 109:77).

III. JOHN LEARNS THAT THE SAINTS OVERCOME SATAN THROUGH THE ATONEMENT OF JESUS CHRIST AND THROUGH THEIR TESTIMONIES (Revelation 12)

Note that much of Revelation 12 is found in the JST Appendix.  If you begin your perusal of the chapter there, you will have the benefit of continuing revelation to clarify the content of this chapter.

The question that needs to be answered about “overcoming” is what we are to overcome.  Chapter 12 supplies an answer to that query.  John, as a part of his vision, saw “a great red dragon, having seven heads and ten horns, and seven crowns upon his heads . . .” (Rev. 12:4, JST)  Some have tried to identify the meaning of the seven heads.  For me it is enough to recognize that if I cut off one of the heads–if I overcome one of Lucifer’s attempts to destroy me–he will come at me from another direction, or perhaps six other directions. Tobacco and alcohol are no temptation to me.  But that does not mean that I cannot be tempted.  Satan knows plenty of other ways to get after me, and he will use them as effectively and maliciously as he can to make me “a prey to his awful misery.” (2 Nephi 9:46)

Revelation 12 describes a woman and a child and their flight from the dragon into the wilderness.  The woman was “the church of God” and the child she brought forth was “the kingdom of our God and his Christ.” (Rev. 12:7, JST) The dragon is of course “that old serpent called the devil, and also called Satan, which deceiveth the whole world; he was cast out into the earth; and his angels were cast out with him.” (Rev. 12:8, JST)

The dragon “prevailed not against Michael, neither the child, nor the woman which was the church of God . . .” (Rev. 12:7, JST)  Therefore he went “went to make war with the remnant of her seed, which keep the commandments of God, and have the testimony of Jesus Christ.” (Rev. 12:17, JST) Since Lucifer was unable to prevail against the church, nor against the kingdom of God and Christ, he determined to attack those who belong to that church and that kingdom. We would do well to remember that a being of awful, malignant power had declared war upon us----relentless, merciless, endless war.

“Woe to the inhabiters of the earth, yea, and they who dwell upon the islands of the sea! for the devil is come down unto you, having great wrath, because he knoweth that he hath but a short time” (Rev. 12:12, JST).

He has been remarkably successful in his war with goodness, because “it was given unto him to make war with the saints, and to overcome them: and power was given him over all kindreds, and tongues, and nations.” (Rev. 13:7)  So many of our brethren have been overcome by the power of the evil one.  He and his servants have offered them freedom from restraint, from commandments—

“While they promise them liberty, they themselves are the servants of corruption: for of whom a man is overcome, of the same is he brought in bondage.  For if after they have escaped the pollutions of the world through the knowledge of the Lord and Saviour Jesus Christ, they are again entangled therein, and overcome, the latter end is worse with them than the beginning” (2 Peter 2:119,20).

Thus we can overcome the power of the destroyer–the dragon– or we can be overcome by it.  And if we are to overcome, how is it to be done?  “They have overcome him by the blood of the Lamb, and by the word of their testimony; for they loved not their own lives, but kept the testimony even unto death.” (Rev. 12:11, JST)

“Who is he that overcometh the world, but he that believeth that Jesus is the Son of God?” (1 John 5:5).

“Wherefore, gird up your loins and be prepared. Behold, the kingdom is yours, and the enemy shall not overcome” (D&C 38:9).