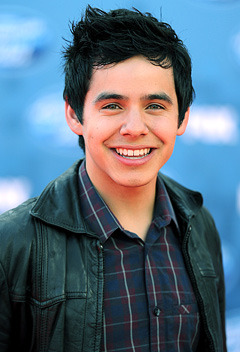 GMA: David Archuleta opts for Mormon missionary life "American Idol" runner-up David Archuleta has told fans he will become a full-time missionary for the Mormon Church in the next stage of his life. Archuleta, 20, made the tearful announcement at a concert in his hometown of Salt Lake City on Monday to cheers and applause from the audience.

US Weekly magazine: David Archuleta Temporarily Quits Music to Become Mormon Missionary David Archuleta is putting his music career on hold to serve the Lord. The 20-year-old singer, who came in second place during the seventh season of American Idol in 2008, told audience members in Salt Lake City, Utah Monday that he plans to stop making music for two years in order to become a full-time Mormon missionary.

Christian Science Monitor: David Archuleta takes break from singing career to join Mormon mission David Archuleta was the runner-up on 'American Idol' and has released three albums, but the singer says he will take a two-year break from all of that to join mission for The Church of Jesus Christ of Latter-day Saints.

Mormon Soprano: David Archuleta Mission Plan Admirable In the video, I love the reaction of the audience, and also David’s unabashed show of emotion. But, I think what I appreciate even most about the moment is his honest explanation of why he is choosing to put his music career aside and serve a full-time two-year mission for his church. Essentially, he feels that God has asked him to go, and he’s saying “Yes” to God.

Entertainment Weekly: David Archuleta to serve Mormon mission American Idol runner-up David Archuleta will take a break from his singing career to serve a two-year proselytizing mission for The Church of Jesus Christ of Latter-day Saints. The contestant from the 2007-2008 season made the announcement during a Christmas concert Monday in downtown Salt Lake City, according to the Deseret News. The 20-year-old Miami native, who grew up in Murray, Utah, said he’s not quitting music, but feels a strong call to serve the church.