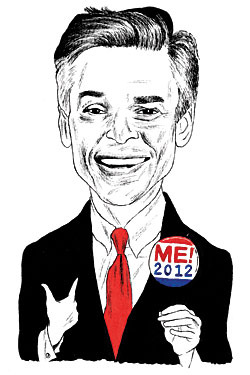 Obama's biggest threat in 2012 may come from his own team: Jon Huntsman

Anyone returning to Washington after the holidays hoping for a calm and quiet reentry must have been sorely disappointed by the first week of the new year: From Capitol Hill to the White House, it was a clamorous, chaotic, and, yes, teary spell that emphatically marked the end of one political phase and the start of another. But this is not a column about the commencement of the Boehner or the Daley era, or the conclusion of the reign of Gibbs. Instead, it’s about a story that broke even earlier in 2011—on January 1, in fact—and then got drowned out by the bang and clatter at both ends of Pennsylvania Avenue, but which certainly merits more attention.

The story in question centers on Jon Huntsman Jr., formerly the Republican governor of Utah and now the U.S. ambassador to China. In an interview with Newsweek, Huntsman—who was widely considered a potential contender for the GOP nomination in 2012 before being named our man in Beijing by Barack Obama—was asked about his political future. “I’m really focused on what we’re doing in our current position,” he replied. “But we won’t do this forever, and I think we may have one final run left in our bones.” Pressed on the possibility of his making that run in the coming election, he pointedly refused to rule it out.

This fleeting flash of Huntsmanian ankle stirred up a swarm of skeptics, who believe the ambassador isn’t serious or is seriously deluded; that his membership on Team Obama and his moderate stances on gay rights (he favors civil unions) and the environment (he endorsed cap-and-trade) mean he wouldn’t have a hope in hell of securing his party’s nomination, let alone taking on the man who is now his boss. No doubt these liabilities are real and significant—but they may not be prohibitive. And if Huntsman were able to overcome them, he just might be the most formidable standard-bearer the Republicans could field against Obama.
Read the rest of this story at nymag.com