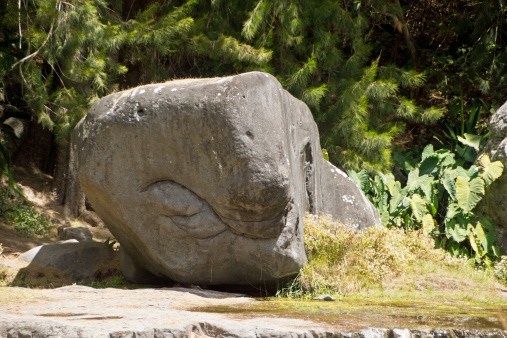 Old Testament Lesson 46: "A Kingdom Which Shall Never Be Destroyed"

When I was young and silly, my parents used to take me to southern Utah to visit relatives almost every summer. We would spend a week or two in Kanab and I would devote hours each day to roaming the red hills and canyons in the area with my cousins. One of the activities in which we sometimes engaged was rock rolling. We would climb the K-hill, a small table-top mountain northeast of town and roll rocks down the side. It was awesome to see the largest boulders we could move crashing down the hillside, gathering momentum and speed, dislodging other great rocks and debris which joined the mad cascade to the bottom. There were times when it seemed as if the whole mountain was moving.

Nebuchadnezzar, king of Babylon, saw something like this. Daniel saw it also—a great stone dislodged from the mountaintop without human effort, rolling and descending until it filled the whole earth. The Church is that stone. It has been “cut” from the mountain (see D&C 65:2) and has been rolling now, gathering momentum and size, for 188 years. We are all a part of that cataclysmic event—the whole world is or will be part of it—and our efforts with regard to that stone will largely determine what we will be hereafter.

Daniel is shown King Nebuchadnezzar’s dream and is given its interpretation by revelation.

“Kill them! Kill them all!” The death sentence passed by Nebuchadnezzar on “the magicians, and the astrologers, and the sorcerers, and the Chaldeans,” in fact, “all the wise men” (Daniel 2:2, 12) for their inability to reveal to him both his dream and its interpretation suggests how troubled he was by this nighttime shadow that he could not quite remember. Of course, Daniel and his companions were among those considered wise men, and the wrath of the king was expansive enough to include them.

Daniel delayed his execution long enough to assure the king that a description of the dream and an interpretation were both.

He received a stay of execution and went home and asked for help.

Then Daniel went to his house, and made the thing known to Hananiah, Mishael, and Azariah, his companions:

That they would desire mercies of the God of heaven concerning this secret; that Daniel and his fellows should not perish with the rest of the wise [men] of Babylon (Daniel 2:17, 18).

Who do you ask to pray with you when you need special help? You may remember that Jared asked his brother to pray for him and his family and friends. Jared had faith and believed that the hand of God was directing the events of his day, but when the results really mattered, he wanted his brother to pray too (see Ether 1:34, 36-37).

When friends of the man with the palsy lowered him through the roof of the house where Jesus was, Jesus healed him because he “saw their faith” (Mark 2:5).

Have the prayers and faith of others assisted you in times of trouble? I know they have helped me. I wrote home from the mission field to tell my mother that my new senior companion was unwilling to work. He spent most of his time watching movies, reading books, and playing. A week or so after I had written, I noticed a sudden change in him. We went tracting! We handed out Books of Mormon. We taught lessons. I was amazed at the dramatic reformation of his work ethic. When the next letter came from my mom, I learned that on the very day things had started to change, she had begun a fast. The power of her faith and prayers reached across continents to bless me in a time of need.

Then was the secret revealed unto Daniel in a night vision. Then Daniel blessed the God of heaven.

Daniel answered and said, Blessed be the name of God for ever and ever: for wisdom and might are his:

And he changeth the times and the seasons: he removeth kings, and setteth up kings: he giveth wisdom unto the wise, and knowledge to them that know understanding:

He revealeth the deep and secret things: he knoweth what [is] in the darkness, and the light dwelleth with him.

I thank thee, and praise thee, O thou God of my fathers, who hast given me wisdom and might, and hast made known unto me now what we desired of thee: for thou hast [now] made known unto us the king's matter (Daniel 2:19-23).

This instant gratitude is a demonstration of an inward devotion that I need to cultivate more conscientiously in my own life. I pray for a lot of blessings, and I receive a lot of blessings, but I forget a lot of times to express my thankfulness. This spirit of undelayed thankfulness in Daniel reminds me of the servant of Abraham sent to find a wife for Isaac (see Genesis 24:26, 51-52). Eliezer was also quick to his knees to say thanks.

Nebuchadnezzar’s search for answers was about as productive for him as calling a psychic hotline would be for us. We must remember that “there is a God in heaven that revealeth secrets . . .” (Daniel 2:28). Looking in less reliable places for important answers may cause us to be disappointed or even deceived. As Daniel told the king, “The secret which the king hath demanded cannot the wise men, the astrologers, the magicians, the soothsayers, shew unto the king . . .” (Daniel 2:27).

I do my best as a teacher, but I find myself in awe of the kind of teaching the Savior does. In my 38 years in CES classrooms, I created images, graphs, drawings, and pictures to help my students learn and remember important lessons. But my best efforts are a pale and indistinct shadow compared to the powerful teaching of the Master Teacher. Is there any chance that either Daniel or the King will ever forget the great image they both saw?

This great image, whose brightness was excellent, stood before thee; and the form thereof was terrible.

This image's head was of fine gold, his breast and his arms of silver, his belly and his thighs of brass,

Neither would they forget the stone “. . . cut out without hands, which smote the image upon his feet that were of iron and clay, and brake them to pieces” (Daniel 2:34).

For that matter, I suspect that you who have read this chapter before have remembered many of the details. This is the kind of teaching that sticks!

Then was the iron, the clay, the brass, the silver, and the gold, broken to pieces together, and became like the chaff of the summer threshing floors; and the wind carried them away, that no place was found for them: and the stone that smote the image became a great mountain, and filled the whole earth (Daniel 2:35).

Daniel explained the meaning of the components of the dream well enough that we can put names with them according to our own knowledge of history:

- The stone is the Church of Jesus Christ of Latter-day Saints (see Daniel 2:44).

- The Head of Gold is a representation of King Nebuchadnezzar and the Babylonian Kingdom (see Daniel 2:37-38).

- The arms and breast of silver are representative of Cyrus the Great and the Medes and Persians (see Daniel 2:32).

- The belly and thighs of brass signify Alexander the Great and the Greeks (see Daniel 2:32).

- The feet of iron and clay represent a group of European nations arising from the remnants of the Roman Empire (see Daniel 2:33; see also Daniel 7:24).

It would not advance the cause of truth to try to identify the nations represented by the feet and toes. It is enough for us to know that during the 1830s, at a time when many nations existed in Europe—some weak and some strong (see Daniel 2:42)—God established a kingdom that:

- Would never be destroyed.

- Shall not be left to other people.

- Shall break in pieces and consume all these kingdoms.

- Was cut out of the mountain without hands and therefore was not the work of men (see Daniel 2:44-45).

We are a part of that kingdom. We have watched in breathless wonder the growth of the Church and the growth of that stone. Even though our enemies and detractors might not know it, the Church is an unstoppable force. While we as individuals may not be as dynamic and powerful as we would like to be, as we follow the course charted by our leaders, we look to a time when the Church will fill the world.

It has been said that this church does not necessarily attract great people but more often makes ordinary people great. Many nameless people with gifts equal only to five loaves and two small fishes magnify their callings and serve without attention or recognition, feeding literally thousands. In large measure, they make possible the fulfillment of Nebuchadnezzar’s dream that the latter-day gospel of Christ would be like a stone cut out of the mountains without hands, rolling forth until it fills the whole earth (see Daniel 2:34-35; D&C 65:2). These are the hundreds of thousands of leaders and teachers in all of the auxiliaries and priesthood quorums, the home teachers, the Relief Society visiting teachers. These are the many humble bishops in the Church, some without formal training but greatly magnified, always learning, with a humble desire to serve the Lord and the people of their wards (James E. Faust, “Five Loaves and Two Fishes,” Ensign, May 1994, 5).

When Christ comes to put all enemies under his feet (see D&C 49:6) and to recompense every man according to his works (see D&C 1:10), we would we well-advised to be part of the stone rather than part of the images of the world destined to be ground to chaff (see Daniel 3:35).

I have thought that there are four ways we could interact with this stone. First, we could ignore it, focusing our attention on more worldly things. Second, we could take our ease (see Luke 12:19), rejoicing in that which we have accomplished and waiting indifferently for the arrival of the rock. Third, we could actively oppose the progress of the boulder, trying to impede the work and the workers; or fourth, we could get behind the stone and push, serving with all our heart, might, mind, and strength. The following verses of scripture suggest which way is best:

And now, verily, I say concerning the residue of the elders of my church . . . behold, they shall push the people together from the ends of the earth (D&C 58:44-45).

Keep these sayings, for they are true and faithful; and thou shalt magnify thine office, and push many people to Zion with songs of everlasting joy upon their heads (D&C 66:11).

Let’s all be pushers.