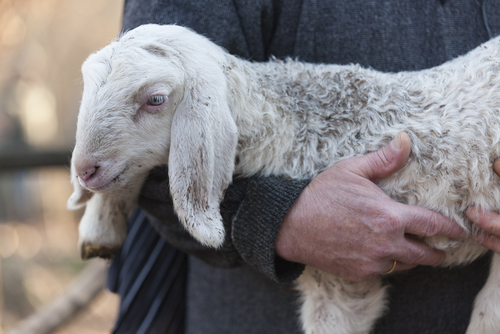 Old Testament Lesson 9: "God Will Provide Himself a Lamb"

Author’s Note: Once again, I feel a need to explain the purpose of these lessons. They are not designed to take the place of the Gospel Doctrine Manual nor of your Sunday experience in a Gospel Doctrine class. My hope is that they will provide additional insights and increased understanding and that those who use them will have a greater love for the scriptures. —T. L. G.

President John Taylor reported hearing the Prophet say, “You have all kinds of trials to pass through, and it is quite as necessary for you to be tried even as Abraham, and other men of God,” and, said he, “God will feel after you, he will take hold of you and wrench your very heartstrings, and if you cannot stand it you will not be fit for an inheritance in the Kingdom of God” (Journal of Discourses XIV, 197).

The Lord intends to prove us in all things in order to learn if there is any circumstance or any set of circumstances that can turn us out of the path defined by our covenants. The experience of Abraham at Mount Moriah is compelling evidence of the intent of the Lord to prove us in unexpected, even heart-wrenching ways.

“Remember that each of us is being tested, just as the finest cars and planes are tested before they are put into service. They are tested for weaknesses; they are tested for flaws. Can you stand the test? At the bar the Judge will not look us over for medals, degrees, or diplomas, but for scars” (Hugh B. Brown, Conference Report, April 1969).

1. Abraham Is Nearly Sacrificed by the Priests of Pharaoh

All of us are familiar with the picture of Abraham on the altar. It is facsimile 1 in the Pearl of Great Price. We know that the man with the knife is the priest of Elkenah, officiating in heathen religious practices that included the sacrificial “offering . . . [of] men, women, and children” (Abraham 1:8). What is not so well-known but very important in this lesson is that Abraham’s father was apparently the moving force behind this offering.

Abraham tells us that his “fathers, having turned from their righteousness . . . utterly refused to hearken to [his] voice.” His efforts to bring about repentance in his family failed, and these relatives “turned their hearts to the sacrifice of the heathen in offering up their children unto these dumb idols” (Abraham 1:5, 7).

In this spirit of apostasy and iniquity, they not only rejected the words of Abraham but “endeavored to take away [his] life by the priest of Elkenah” (Abraham 1:7).

Later we are told that Abraham’s father “was sorely tormented because of the famine, and he repented of the evil which he had determined against me, to take away my life” (Abraham 1:30).

I cannot leave this account without a note regarding the three virgins who had previously been “offered upon this altar . . . at one time” (Abraham 1:11).

“These virgins [all daughters of one man] were offered up because of their virtue; they would not bow down to worship gods of wood or of stone, therefore they were killed upon this altar, and it was done after the manner of the Egyptians” (Abraham 1:11).

I wish we knew more of these women who cherished their virtue more than their lives. The inclusion of a brief explanation of their fate by Abraham cannot be an accident. Surely we are meant to learn something about how precious virtue is from this account.

These two accounts taken together suggest that Abraham might have had a particular aversion to one specific manifestation of wickedness, and that would be human sacrifice, and especially the sacrifice of children by their own parents. Without any scriptural evidence whatsoever, we might still safely assume that the memory of that altar and the raised knife never left Abraham.

Now, with that background, consider the statement of John Taylor in the introduction and the determination of the Lord to prove us in all things, and ask yourself this question: if the Lord really wanted to test Abraham, what would be the most difficult thing he could possibly ask him to do?

You remember that it was Abraham who reported to us these words of Christ:

“And we will prove them herewith, to see if they will do all things whatsoever the Lord their God shall command them” (Abraham 3:26).

Abraham had written it and would have the opportunity to show if he meant it.

2. Abraham Has Children Through Hagar and Sarah

In Genesis 12:2, the Lord promised to make of Abraham “a great nation.” Years passed and the promise seemed unlikely of fulfillment. Abraham took the matter to the Lord:

“And Abram said, Lord God, what wilt thou give me, seeing I go childless, and the steward of my house is this Eliezer of Damascus?

“And Abram said, Behold, to me thou hast given no seed: and, lo, one born in my house is mine heir.

“And, behold, the word of the Lord came unto him, saying, This shall not be thine heir; but he that shall come forth out of thine own bowels shall be thine heir.

“And he brought him forth abroad, and said, Look now toward heaven, and tell the stars, if thou be able to number them: and he said unto him, So shall thy seed be” (Genesis 15:2–5).

Have you ever had to wait for a long time for the fulfillment of a divine promise? I think we can be sure that even if God doesn’t come when we want him to, he will never be late.

In the Old Testament, fertility problems are always blamed on the women. No man was ever identified as infertile or barren. Sarah must have felt a burden of responsibility for the absence of children in her home. In Genesis 16:3–4, what does Sarah do for her husband?

When Hagar conceived, “her mistress was despised in her eyes” (Genesis 16:4). Sarah “dealt hardly” with her (Genesis 16:6) and Hagar fled. An angel found her, told her to return, and gave her a name for her unborn son. The name was Ishmael. According to Genesis 16, footnote 11a, what does that name mean? The angel found Hagar by a fountain of water. What name did she give that well according to Genesis 16:14? What does that name mean?

“And she called the name of the angel of the Lord. And he spake unto her, saying, Knowest thou that God seest thee? And she said, I know that God seest me, for I have also here looked after him.”

Why is it important throughout this story to know that God hears and God sees? Do we sometimes forget that great reality when life becomes nearly unbearable or when it ceases to make sense? Hagar, Abraham, and Sarah all learned that God does indeed hear and see. This is a lesson we need to learn too. Even when the answers we seek do not immediately appear, we must remember that he hears and sees. And because of his perfect love, he will bless us in the ways that are best for us.

The Lord made it clear that this covenant was not with Abraham alone but also with Sarah his wife.

The Bible indicates that upon hearing this “Abraham fell on his face and laughed” (Genesis 17:17). What word does the footnote suggest in place of laughed? Which word fits best with what you know of Abraham? What promise did the Lord make about Isaac? (Genesis 17:19–21).

“And it came to pass after these things, that God did tempt Abraham, and said unto him, Abraham: and he said, Behold, here I am” (Genesis 22:1).

Look at the footnote for the word tempt in this verse. The use of the word prove here reminds us once again of Abraham 3:25. Take a moment to review the conditions that would make keeping this commandment so difficult:

No doubt there were other compelling reasons for disregarding this commandment. But all of them together did not deter Abraham. He rose up “early in the morning . . . and went unto the place of which God had told him” (Genesis 22:3).

“How often do Church members arise early in the morning to do the will of the Lord? How often do we say, ‘Yes, I will have home evening with my family, but the children are so young now; I will start when they are older’? How often do we say, ‘Yes, I will obey the commandment to store food and to help others, but just now I have neither the time nor the money to spare; I will obey later’? Oh, foolish people! While we procrastinate, the harvest will be over and we will not be saved. Now is the time to follow Abraham’s example; now is the time to repent; now is the time for prompt obedience to God’s will” (Spencer W. Kimball, “The Example of Abraham,” Ensign, June 1975, 4).

Isaac’s part in this offering is not clear, but it is certain that he was no infant. He carried the wood for the sacrifice (Genesis 22:6); a substantial amount would have been needed for the task at hand. A boy or young man capable of this kind of effort would have been capable of running away or resisting the efforts of a father well over one hundred years old. But there is no hint in the account of anything but wiling acquiescence on the part of Isaac (see Genesis 22:7–9).

Abraham might have remembered as he raised the knife his own experience on the altar in Ur of Chaldea. An angel had intervened there. But Abraham was determined to do the thing the Lord had commanded him to do. He had no intention of backing out if an angel did not appear in time. The Lord knew that. He stopped Abraham, and then, through his angel, he said:

“By myself have I sworn, saith the LORD, for because thou hast done this thing, and hast not withheld thy son, thine only son:

“That in blessing I will bless thee, and in multiplying I will multiply thy seed as the stars of the heaven, and as the sand which is upon the sea shore; and thy seed shall possess the gate of his enemies;

“And in thy seed shall all the nations of the earth be blessed; because thou hast obeyed my voice” (Genesis 22:16–18).

But there is another level. All of us deserve spiritual death. Since God cannot look upon sin with the least degree of allowance (see Alma 45:16; D&C 1:31), and since all of us are sinners (see 1 John 1:8; Romans 3:23), our only expectation, based on our own merits, is to receive the punishment we have earned by our sins. But the Lord provided a lamb for us as well. The Savior came into the world and suffered the “pains of every living creature” (2 Nephi 9:21). He satisfied the demands of justice.

A sacrifice was prepared from before the foundation of the world to be offered in our place so that we might escape the demands of justice and be saved by the “merits, mercy, and grace of the holy Messiah” (2 Nephi 2:8).

We will do well to remember that this life is a test designed to see if we can qualify for those merits, that mercy, and that grace.

“We need strength beyond ourselves to keep the commandments in whatever circumstance life brings to us. For some it may be poverty, but for others it may be prosperity. It may be the ravages of age or the exuberance of youth. The combination of trials and their duration are as varied as are the children of our Heavenly Father. No two are alike. But what is being tested is the same, at all times in our lives and for every person: will we do whatsoever the Lord our God will command us?” (Henry B. Eyring, “In the Strength of the Lord,” Ensign, May 2004).