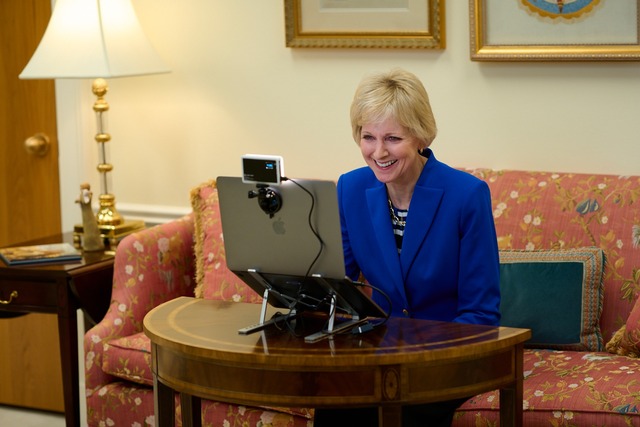 On International Women's Day, President Bingham addresses 'one of the greatest impediments' daughters of God face

byNewsroom of The Church of Jesus Christ of Latter-day Saints | Mar. 08, 2021

Sister Jean B. Bingham, the Church’s Relief Society general president, was the keynote speaker at the fifth annual International Women-in-Diplomacy Day symposium. The event originated from Los Angeles and was held virtually this year because of the pandemic. The event was sponsored by the honorary consul of the Republic of Senegal.

“As one woman to another, I rejoice in our shared vision of helping to improve the lives of women no matter where we live,” Sister Bingham told the international business leaders and diplomats who attended the event.

Sister Bingham is the general president of the Church’s Relief Society organization, which represents more than 7.5 million Latter-day Saint women in 220 countries.

The Relief Society general president shared a video commemorating International Women's Day during her address, which she also shared on social media.

Referring to the pandemic’s impact on women worldwide in the familial, personal and professional aspects of their lives, Sister Bingham continued her remarks by sharing her admiration for women in the face of adversity.

“My head is bowed to you for all you are accomplishing in these difficult challenges,” said Sister Bingham.

In her speech, Sister Bingham shared that although her faith in the gospel of Jesus Christ leads her to believe that “every single woman and girl on this earth is a beloved daughter of God” and gives her “hope that circumstances that oppress so many can be overcome,” she “is not naïve” and she recognizes that “one of the greatest impediments [to their] success and happiness is lack of education.”

The assembly, hosted in Los Angeles with panelists and participants tuning in from coast to coast, shared messages that focused on celebrating women’s resilience and discussions on how to empower women and girls through entrepreneurship and economic development.

Sister Bingham said that “education lifts a person’s vision, broadens their horizons and strengthens their ability to be self-reliant.” She referenced a study by Citi Global Perspectives & Solutions in cooperation with Plan International that illustrates how educating women can provide their families and communities with long-lasting economic security.

“I know the power in a community that resolves to protect and then empower its most vulnerable and also most valuable resource—the next generation,” she said.

Sister Bingham’s remarks also highlighted the Church’s efforts to help women globally with additional education and talked about its Gospel Literacy program, an initiative that currently assists women in West African countries to obtain enough literacy skills to assist their own children with their schooling and helps the women become sufficiently educated to serve as teachers or leaders in their local congregations.

The Latter-day Saint leader shared the experiences of women who used education to pave a path to success, including Martha Lusenie Kongoley, a woman from West Africa who dropped out of school before learning how to read or write because she could no longer afford school fees.

“As a young mother, she faced the stark reality that she needed to somehow earn money to purchase food for her children,” said Sister Bingham. “By enrolling in the Gospel Literacy program, Martha gained the skills and confidence to start a small business.”

Sister Bingham said that Kongoley’s newly acquired education gave her a stable income and the ability to mentor teenage girls within her congregation.

“I am thankful for the role that The Church of Jesus Christ of Latter-day Saints and many others are playing to improve the lives and develop opportunities for women around the world,” said Sister Bingham. “As leaders, we are in a unique position to influence those who create the policies that will open the doors to education for women and girls. I extend an invitation to each of us to leverage the advantages we enjoy in order to create more opportunities for our sisters around the world.”

Lead Image: Newsroom of The Church of Jesus Christ of Latter-day Saints