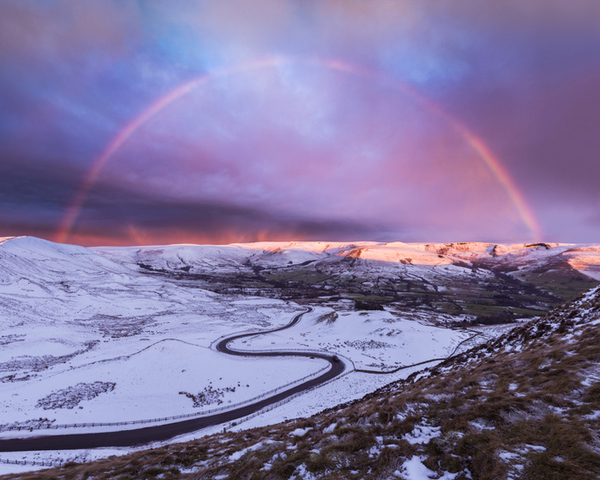 I love the simple, relatable, and steadfast faith of the man born blind mentioned in John 9. When the Pharisees—religious leaders who had the power to condemn him—began inundating him with accusations against the Savior, this man stood and bore a simple testimony: "He answered and said, Whether he be a sinner or no, I know not: one thing I know, that, whereas I was blind, now I see" (John 9:25).

This has been a pattern in my life. As soon as faith begins to bud or take root in my soul, I become inundated with negativity, doubts, and partial truths. The Pharisees were right: Christ did heal on the Sabbath. But did that warrant the slurs and criticism He received? When similarly faced with partial truths or doctrine I don't yet have the ability to understand, I've often prayed to have the ability to say as this brave man did, "One thing I know, that, whereas I was blind, now I see." Whereas I was in darkness, now I have light. Whereas I was in despair, now I have hope.

But it's not always outside forces that cause blindness or limitations in our ability to see. Sometimes it is my own complacency or pride that causes me to think, "I've read that passage a hundred times before. I've heard this lesson a million times. I know what it means." I received a needed chastisement this week while studying the scriptures that illuminated the fact that I often understand the gospel in a simplistic, linear, mortal, and flawed way that keeps me from relying on God to gain deeper, divine truths.

In an instant, I wanted to join Ezekiel in falling on my face. I've often heard of our Savior and God described in terms of light, but I never allowed the totality of that image and understanding to sink in. Here are a few examples of these passages:

"And was transfigured before them: and his face did shine as the sun, and his raiment was white as the light" (Matthew 17:2).

"I saw a pillar of light exactly over my head, above the brightness of the sun, which descended gradually until it fell upon me" (Joseph Smith—History 1:16).

"His eyes were as a flame of fire; the hair of his head was white like the pure snow; his countenance shone above the brightness of the sun; and his voice was as the sound of the rushing of great waters, even the voice of Jehovah" (Doctrine and Covenants 110:3).

Sometimes I can let common depictions of our Savior or God influence how I envision them. I rely on others' understanding and interpretation of the divine instead of seeking, seeing, understanding, and connecting with the divine in my own way. In short, I fail to understand the breadth and depth of God, which encompasses our Heavenly Parents working in unity, as well as the Savior and all They can mean to me.

In reading that passage from Ezekiel, I suddenly understood that the light that surrounds the Lord was a "bow that is in the cloud in the day of rain." The glory and light that surrounds Him is a rainbow that captures every facet of light and color. Different colors shine through that prism depending on where we are standing at the time and what we need in our life.

This is much like the prisms I've often seen in temple chandeliers. I've loved the symbolism of these fixtures, sources of light in the temple that reflect every possible color imaginable. It's a subtle and comforting reminder to me that all—regardless of race, political affiliation, gender, life experience, past mistakes, current failings—belong in the temple. What makes the celestial celestial is infinite variety coming together in exquisite unity. It's not monotony. It's not extinguishing differences but illuminating them through light to create more light.

Our Savior and Heavenly Parents are the same. They encompass all races, genders, cultures, religions, differences, and divides and empathize with us perfectly because it is a part of who They are and what They have experienced. Our Savior bears hundreds of names and titles because He is all of those and more for us. It all depends on where we are standing at the time and what we most need. Our Heavenly Parents and Brother are not a single, colorless tone, but a luminous and infinitely varied arrangement of colors and experiences. And through knowing Them, we also gain exquisite color and variation. Because we are all a part of God. We are a part of His family. We are sparks of light that reflect new color and vibrancy.

I loved Sister Sharon Eubank's recent general conference talk. In it, she shares a beautiful story about the Lord turning our stones into light:

"Not many years ago, I was weighed down and irritated with questions I could not find answers to. Early one Saturday morning, I had a little dream. In the dream I could see a gazebo, and I understood that I should go stand in it. It had five arches encircling it, but the windows were made of stone. I complained in the dream, not wanting to go inside because it was so claustrophobic. Then the thought came into my mind that the brother of Jared had patiently melted stones into clear glass. Glass is stone that has undergone a state change. When the Lord touched the stones for the brother of Jared, they glowed with light in the dark ships. Suddenly I was filled with a desire to be in that gazebo more than any other place. It was the very place—the only place—for me to truly 'see.' The questions that were bothering me didn’t go away, but brighter in my mind was the question after I woke up: 'How are you going to increase your faith, like the brother of Jared, so your stones can be turned into light?' . . . For those seeking truth, it may seem at first to be the foolish claustrophobia of windows made of stone. But with patience and faithful questions, Jesus can transform our windows of stone to glass and light. Christ is light to see."

Just as God was able to transform the brother of Jared's meager offering into glass and light, He can transform us, even with all our flaws, into glass and light. In Doctrine and Covenants 77:1, we learn that the "sea of glass" mentioned in Revelation is "the earth, in its sanctified, immortal, and eternal state." We, too, should strive to become a sea of glass, a prism, that reflects not only our own light but the light of God and others in their beautiful variety. Embracing that diversity and the good in all light is what sanctifies us, leading us to immortality.

I love the context of when and where our Savior declared He was the light of the world. As Dr. Taylor Halverson notes, John 8:2 reveals, "And early in the morning Jesus came again into the temple." It was in the morning, as a vivid sunrise and the first rays of light were shining through the temple that Jesus Christ declared Himself the Light. He turns dark skies into glorious sunrises filled with color. He illuminates the formless grey around us revealing infinite variety in the world. He lets us see the best in ourselves and the best in others.

I know it seems overwhelming to think of a Savior and God who are so vast, complex, encompassing, and unknowable to mortal minds but at the same time are tenderly and intimately knowable, simple, and close. But I had a small glimpse into Their indescribable love and nature, and it left me spiritually breathless, falling on my face in awe. It's not enough to read and trust what others know of God. We must work to part the veil and know for ourselves, even if in brief glimpses, small shards of glass, or tiny sparks of light.