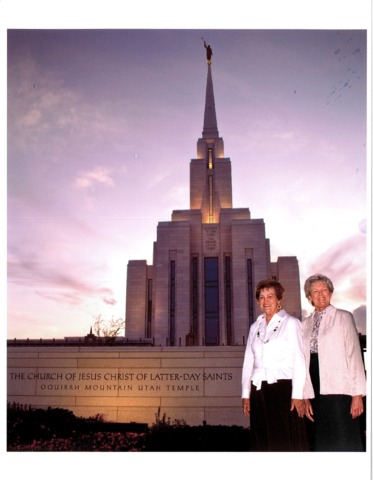 With a tank full of gas and a spirit full of faith, two women in their late sixties embarked on a journey that would lead them to nine temples in one day.

In celebration of the Oquirrh Mountain Temple dedication, Joan Groves and Diane Babcock began their journey at 4:30 a.m. with the intention to perform ordinances at eight different temples.

Groves was the mastermind behind the plan and invited her friend of over 40 years, Babcock, to come along. Groves mapped out all the closest temples, the driving times, and their opening and closing times. She then proceeded to do a trial run to each.

With their intensive preparation (including water, snacks and meals), Groves and Babcock were ready to begin their journey. Their first stop, the Jordan River Temple, was not only the closest in proximity to them, but also opened the earliest at 5 a.m.

Next was Mt. Timpanogas. After traveling 10 miles out of their way to avoid construction, they finally arrived at the temple where they were told it would be a 40 minute wait. The temple worker then proceeded to tell them, “Every time the prophet speaks about temples or there is a new temple dedicated, there is an increase in temple attendance.”

Deciding whatever amount they were able to accomplish would be acceptable to the Lord, they emerged from the temple two hours later.

From there, they proceeded to visit the Draper, Oquirrh Mountain (which had opened its doors that very morning), Salt Lake and Bountiful temples. At 4:45 p.m. they had completed work at seven temples. Heading to their last destination, the Ogden Temple, they began to explore the possibility of visiting the Logan Temple as well.

“I would rather go to Logan than Ogden, and if we don’t make it to Ogden, we will still meet our goal of eight temples,” Babcock said.

It was decided. Seventy-four miles and one and a half hours later, they arrived at the Logan Temple. They emerged 45 minutes later at 7:05 p.m. and headed for Ogden. They arrived just before 9:00 p.m., and the doors were locked behind them.

“Our temple marathon was a wonderful experience,” Groves said. “From the pink roses of Provo to the pastel inpatients of Ogden, once inside the temple, there was a feeling of peace and tranquility, a stillness testifying of the power and divinity of the Lord’s plan for His children.”

Groves and Babcock are not only faithful sisters, but also parents and grandparents. Groves is currently serving a mission and Babcock is home spending most of her time with family. According to Babcock, “Another temple [in Brigham City] has been announced since our excursion. When Joan comes home, we’ll do ten.”