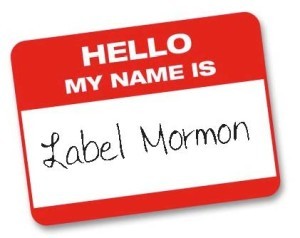 If I were to write a post about how inappropriate it would be for members of Christ’s church to affix labels to fellow saints, it would be one of the shortest posts ever written. It would consist of a perfect quote from President Uchtdorf: “Stop it!”

Here are a few examples: (Feel free to substitute LDS for Mormon if you so desire.)

You get the idea. There are many, many different adjectives that we tack onto our faith to help better define who we are.