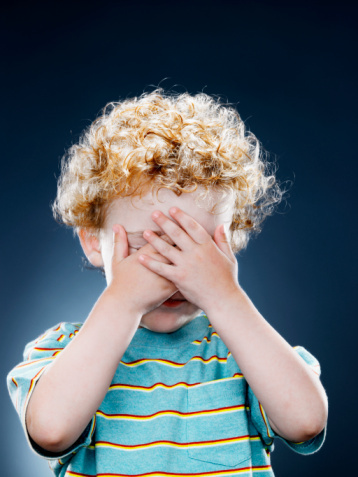 It’s Sunday and you’re in Primary to help your child with the talk she has been asked to give. You feel confident it will go well—you’ve practiced it over and over with her. Then, when her name is called, she simply refuses to get out of her chair.

Larry Nelson, assistant professor of human development at Brigham Young University, who specializes in shy and withdrawn behaviors in early childhood, had this exact experience with his daughter when she was younger. He made sure to handle it carefully and deliberately because he knew that when it comes to shy children, any extreme reactions from their parents or other adults can actually make their condition worse.

Some parents overreact because they think the condition is irrational or bad. In fact, almost 40 percent of adults in the United States have reported that they used to be shy at some point in their lives. This likely means two things: one, shyness in children is relatively common and even normal, and two, many of these children manage to get over it by the time they reach adulthood.

When dealing with shy children, Nelson says it’s important that parents understand that shyness is physiological. Children do not choose to be shy—they are born that way. “We’d never walk up to a very tall person and say ‘hey stop being so tall,’ but we tell kids all the time to stop being shy. It’s not that easy.”

Nelson explains for shy children the whole nervous system is different: they have different brain patterns and higher levels of the stress hormone called cortisol. This causes them to be more reactive and fearful, and counteracting it is not as easy as telling them to get over it. However, there are some things parents can do to help their children eventually overcome this physiological condition.

First, there are two things Nelson says parents should not do if they want their children to overcome shyness. One is to force them outright into things they don’t want to do. “I would liken it to trying to teach a child how to swim by throwing them into the deep end of the swimming pool without a life jacket,” Nelson says. You don’t want to traumatize your child.

On the flipside, the other thing Nelson says to avoid is becoming overprotective of your child. Allowing them to permanently avoid situations that make them uncomfortable and telling them it’s okay to do so will not help them learn how to deal with their fear.

Nelson explains you can’t push a boulder up a hill all at once, you have to give it gradual taps. He used this principle with his daughter when she refused to give her Primary talk; he first took her outside and explained to her kindly but firmly, so she knew it was serious, that when you agree to do something, you have to do it. He warned her that next time he would give her a time out and take her home if she didn’t give her talk.

Shy children tend to be very sensitive and really want to please adults. This can be used either to hurt them or to help them. In this case, Nelson’s daughter was bothered by her father’s scolding, and when her father arranged for her to have another talk shortly afterward, she went up to the microphone and whispered the whole talk to the Primary.

“I was probably the only person in the room who heard it,” Nelson says, “but [my wife and I] made a big deal about it. We let her know we were happy about it.”

Rewarding your child for even the smallest of accomplishments will help move him or her, step-by-step, towards being outgoing. Nelson told his daughter that next time she had to say it loud. The time after that, he didn’t whisper the talk in her ear but instead sat in front row. After that he moved to the back of the room. While Nelson says his daughter told him she was scared, she focused on looking at her aunt who had a calling in Primary and was sitting in the front row with a smile on her face.

Because her father ensured she had this experience, she learned on her own to find things that made her feel better while she was outside of her comfort zone—things that helped her to cope with it. He says today she has gotten so much better that when a speaking companion cancelled his talk in church last, Nelson’s shy little girl volunteered to replace him.

Setting goals has been proven to improve performance in all aspects of life, and helping your child overcome shyness is no exception. John Malouff, PhD in psychology, set a goal for his shy daughter to say at least one word to one new person every day. In an article called “Helping Young Children Overcome Shyness,” he said goals should be challenging but realistic, and for every day his daughter accomplished this goal, he offered her a small reward or treat.

Something that also helps shy children, according to both Malouff and Nelson, is to help them rehearse social situations. Before Nelson had his daughter try and order her meal when they went out to dinner, or talk to an adult in a store when she had a problem, he would rehearse it with her so she knew what to say. With practice, children can form habits of being more outgoing and can remember what to say without help.

Perhaps one of the most important things to remember is to make sure not to make your child feel bad about being shy. According to Malouff, this can cause a “downward spiral” as children lose self-confidence. Avoid labeling your child as shy, especially in front of other adults. Politely disagree with adults if they call your child shy in front of him or her. These kinds of statements can only encourage children to fulfill the role adults have given them and not make any attempt to change.

To help your child understand that it’s normal to have these fears, try telling him or her about experiences in which you were shy, and then explain how you dealt with it.  At the same time, set an example in your current life of being outgoing with your peers. Invite friends and family into your home and speak to people next to you in the grocery line, and your child will be able to observe from someone they admire the way things can be done.

Nelson points out that shy kids are just like everybody else. They want to fully participate socially, they just need the right encouragement help them feel they have the ability to do so.