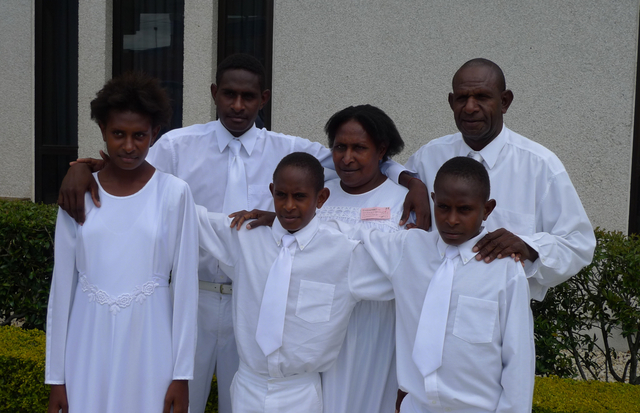 Some canoed for four days from remote villages. Several came from Daru, an island close to the Papua New Guinea mainland. Many had never seen a large town before, and very few had ever visited the city of Port Moresby. Certainly none had seen a western city the size of Sydney.

This group of LDS members was united in one thing: to visit a temple of the Lord and to participate in and receive eternal ordinances.

The group of forty Church members from various parts of New Guinea gathered together in Port Moresby to travel as a group to visit the Sydney Temple. Elder Dirk Smibert, an Area Seventy responsible for Papua New Guinea, made arrangements for the flights from the island and the sleeping accommodation at temple housing in Carlingford for all of the families. Local Relief Societies supplied warm clothing for the Papua New Guinea members as well as familiar food for their meals.

“We were glad to have such delicious taro root, tapioca and raw fish fixed for us by Australian-based Pacific islanders,” commented Brother Tete, one of the 40-strong group.  “Our food was delicious and very much appreciated.”

For most of the group, this was their first time out of the country, and several were greatly surprised by things most take for granted, such as plumbing, nappies, tunnels and the abundance of food and clothing.

“We are very blessed to have Saints from Port Moresby, Papua New Guinea and the Solomon Islands coming to the Sydney Temple to receive their saving ordinances”, said Elder Smibert.

It was a sacrifice for the members to make this journey to the temple, but one for which they are eternally grateful.