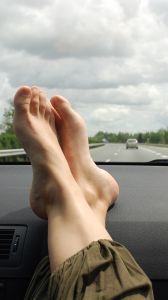 Peace in the Backseat

We could listen to AM radio, which pretty much meant Mantovani or static (sometimes it was difficult for my rock-n-roll-lovin' ears to tell the difference). Or we could race drops of sweat down the Naugahyde upholstery. Or we could play a game called "Beaver," during which you searched oncoming lanes of traffic for Volkswagens, and the first person to see one coming shouted out "Beaver!"

You may ask: why did we shout out "Beaver!" instead of, say, "Beetle" - or even "Farfegnugen"? I have no idea. Ask Kathy. It was her dumb game.

Or we could play "The Alphabet Game." This game required that you know the letters of the alphabet, and that you spot them - in their proper order - on signs and billboards as you drove past. This game had two variations. The first required that the letter be the first letter of the word on the sign. The second allowed the letter to be anywhere within the word. We usually started out playing by the first set of rules, but always shifted to the second set of rules about the time we got to the letter "Q." This game was usually won by whoever was close to the end of the alphabet by the time we got to the exit for Zzyzx Road in Southern California.

It's difficult to imagine more fun entertainment choices than those, isn't it? Unless, of course, you throw in an occasional outbreak of hostilities when "Beaver!" is shouted by two alarmingly similar adolescent voices simultaneously, followed by Dad's threatened "Don't make me turn this car around" and a quick retreat to our respective corners of the backseat.

Oh, yeah. We really knew how to travel back in the day.

And yet, there we were last week, zipping across the American western desert with nary a "Beaver" to be heard from the backseat. Instead, our teenager, Beth and Jon, sat in contented, air conditioned silence, blissfully unaware of the sand and sagebrush as we rolled through it. Beth was accessing the internet on her laptop computer—don't ask me how—while engaging in cell phone text messaging with friends back home. Jon was watching cartoons on a portable DVD player. And Anita and I were enjoying the latest Michael Buble CD on our car's stereo and wondering if we could trust the authenticity of a Mexican food establishment called the Kan Kun.

When we drove past Zzyzx Road nobody noticed. Or cared.

Except me. I began to worry that we were missing something—that perhaps technology was eliminating some of the important bonding moments of family travel, turning a shared experience into an exercise in motorized narcissism.

"Hey, guys!" I sang out to my children in the backseat. "Let's play Beaver!"

"I don't think they can hear you," Anita said. "They're both wearing earphones."

"Oh, I think there's plenty of interaction," Anita said. "And we'll be doing nothing but interacting when we get there. Meanwhile, they're happy."

I glanced at them in the rear-view mirror. It was true: they were both wired for sound - and smiling. There was peace in the backseat, and that had to be worth something, didn't it?

So I'll continue to treasure memories of family trips back in the day - the sweating, the alphabet, the Mantovani. But that doesn't mean I can't also embrace a new and - okay, I'll say it - improved way of doing things today. Like they say, you can teach an old dog new tricks.

Not to mention an old Beaver.