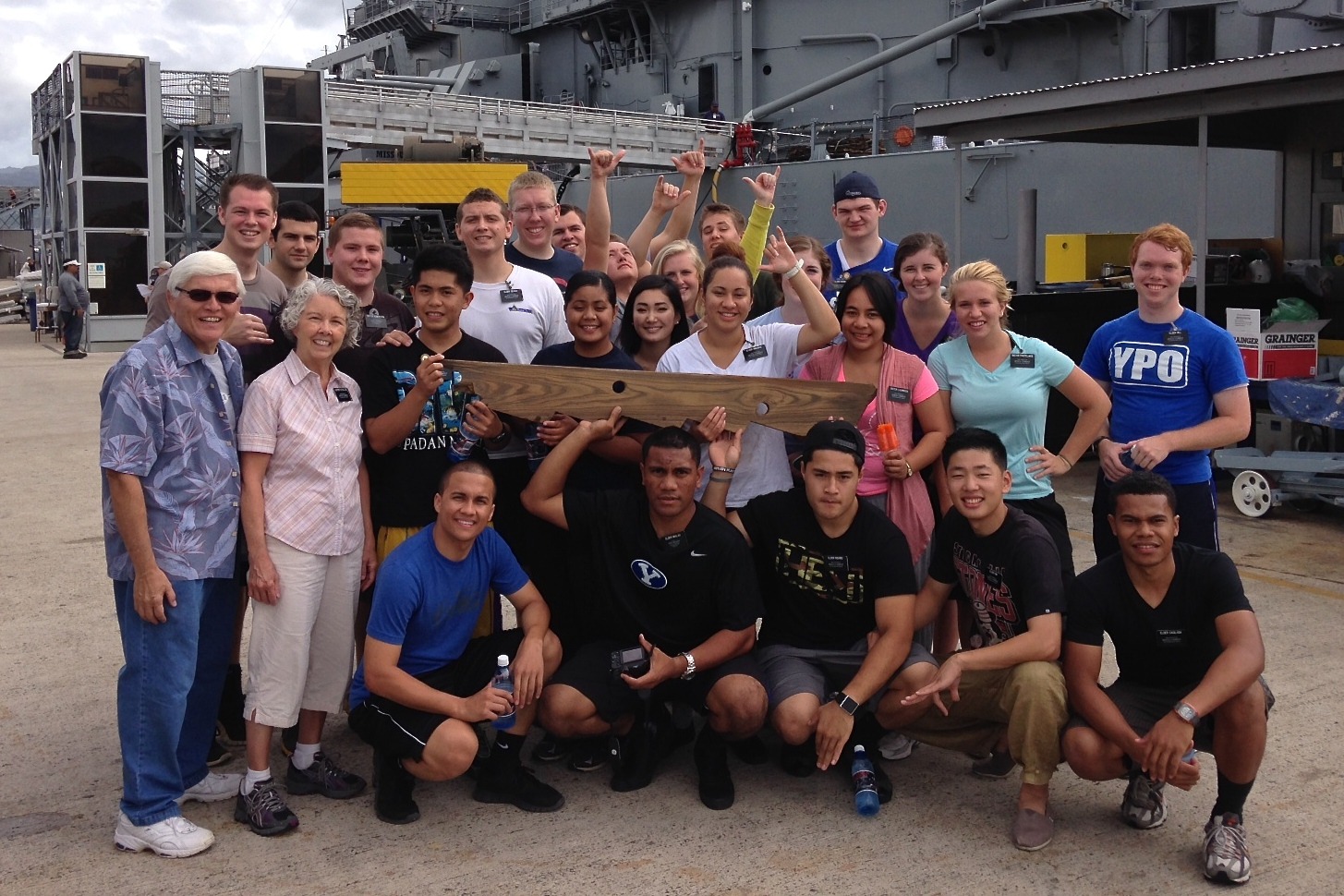 The USS Missouri has witnessed some of the proudest moments in US history, from serving as the place of final surrender in WWII to her final mission to Pearl Harbor on the 50th anniversary of the attack.  When she was decommissioned on March 31, 1992, the USS Missouri stood as the last active battleship in the world—a legacy of the lives, the values, and the nation she defended over five decades and three wars.

For the past four years, LDS missionaries have played a crucial role in maintaining this battleship’s rich heritage—a task that has been no small feat.  Since 2010, groups of missionaries from all over Oahu report for duty on the USS Missouri every Wednesday, performing maintenance work from patching the old teakwood deck to shining up handrails.

In that time, the missionaries have performed an estimated 10,000 hours of service renovating and cleaning the 887 foot long battleship.  Over the past 10 years, LDS missionaries and Church members have donated the equivalent of over a quarter of a million dollars in service hours.

As a result of this incredible work, LDS Church leaders have now joined the list of notable historical figures honored on the deck of the USS Missouri.  On December 5 the USS Missouri Memorial Association presented Elder Daniel L. Johnson of the First Quorum of the Seventy with a plaque made from wood salvaged from the battleship’s deck, expressing their gratitude for the charitable contributions the Church has made in preserving this historical landmark.

When the Japanese Navy attacked Pearl Harbor on December 7, 1941, the USS Missouri was still under construction in New York and would remain under construction for the next two years, taking 175 tons of blueprint paper and over 3 million man-days to complete.  Nicknamed the “Mighty Mo,” the USS Missouri measures 5 feet longer and 18 feet wider than the RMS Titanic. Encased in 13.5 inch thick armor plating, Mighty Mo has nine 16-inch-barrel guns and twelve 5-inch-barrel anti-aircraft guns, making it one of the most formidable battleships ever built.

The USS Missouri steamed into Pearl Harbor for the first time on Christmas Eve, 1944, bringing with it the memory of the 8 battleships and over 2,400 lives lost in the surprise naval attack just three years previously.  Mighty Mo was assigned to the Pacific Third Fleet where it played an important role in the bombing raids of Tokyo and the battles of Iowa Jima and Okinawa.

On September 2, 1945, the USS Missouri served as the stage for Japan’s unconditional surrender to the Allied Forces, marking the end of World War II, but not the end of Mighty Mo’s story.

The USS Missouri continued to serve her country well through the Korean and Persian Gulf Wars.  Decommissioned in 1992, the USS Missouri now lies anchored in Pearl Harbor overlooking the decaying wreckage of one of her fallen sisters, the USS Arizona.  Even now—73 years after the USS Arizona sunk beneath Pearl Harbor’s water, entombing the servicemen still within—oil still bleeds from the hull of the ship at the rate of two to nine quarts per day.  The contrast between these two battleships serves as a visceral reminder of all that was lost on December 7, 1941.

It’s fitting that the battleship which witnessed the United States’ final hours in World War II should lay at rest in the waters of that harbor which saw the beginning of US involvement in the war.  Visitors to Pearl Harbor today can walk the deck of Mighty Mo and see for themselves this legacy and memorial of the past, a legacy that LDS missionaries help keep alive through their continued service and sacrifice.