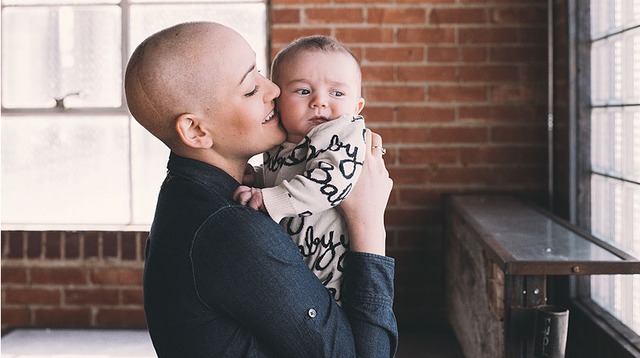 Kristin Sombolt has been diagnosed with cancer--twice. The second time was just days after giving birth to her first child: "We went home and enjoyed our baby – he is such a delight and happiness in my life," Kristin said after she learned her diagnosis.

"He's worth fighting for and has helped me to remain hopeful. Some nights, I go to bed crying because I won't get to spend 20 years with my child. But he's in my life today. So that's what I focus on."

Two days before her first baby was due last October, Kristin Sumbot of Salt Lake City woke up on a Saturday morning with an unusual headache and padded down the hall to the kitchen to get something for breakfast. Before she reached the refrigerator, though, she ran into the doorframe and two walls.

She knew right then that something was wrong.

Kristin's husband, Nathan, 28, drove her to the hospital, where the 25-year-old artist and homemaker was given a head MRI. The scan revealed that Kristin had suffered a brain hemorrhage, so doctors decided to give her an emergency C-section that same day.

Just two hours later, August James Sumbot was born, weighing exactly eight pounds. "We enjoyed those first moments with him so much – he was like a calm in the storm," Nathan, an attorney, tells PEOPLE. "And then we had to prepare ourselves for some very bad news."