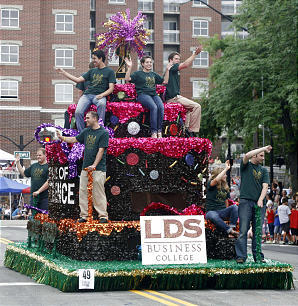 The glitter of the floats were reflected in the eyes of the spectators July 25 as the Days of '47 parade strolled down the streets and painted wild fantasies, including an animal tabernacle choir, bees who drove cars and spaceships, and even a friendly shark who sported flotation wings.

Following this year's theme of "Press Forward Pioneers," onlookers gazed in amazement as thousands of gallons of glitter took on the form of a magical wonderland of sea creatures who "sailed forward," and penguin missionaries who "press forward unto every nation."

The parade included 50 floats, 20 of them sponsored by LDS wards and stakes, who started working on them as early as January.