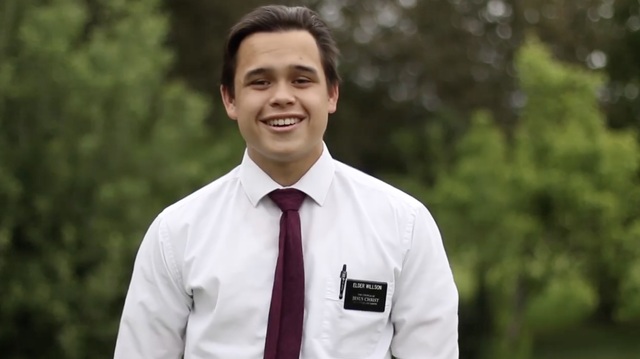 If you’ve served a mission in the last seven years, chances are that the Nashville Tribute Band’s album The Work became a part of your mission experience.

For missionaries in the Pocatello Idaho Mission, their relationship with the  music became even deeper when they joined together with the band itself to create a music video of “I Was Born.” The video has already been viewed over 17,000 times.

“This video was made to keep the mission united and to remember our purpose,” President Stephen Southward, who presides over the mission, said. “We all come from different places, but we know as we continue to be united we will continue to see the heavens pour down blessings. We still cannot all meet together, but this helped us feel connected. We also want those we serve to realize how important the message [is] that we share. . . . Heavenly Father has brought us to them from many different places in the world to serve them.”

In a particularly touching moment toward the end of the video, Elder Bradley Willson, an elder from Sydney, Australia, sings a line that rings particularly true for him, “I was born in Australia where the gum trees smell like bush and home. Born the son of humble converts and I’m here to pay it forward.”

As lovers of any great conversion story, we were curious about how Elder Willson’s family came in contact with the restored Church. Amelita Willson, Bradley’s mother, joined the Church in December 1988 in her early twenties, Bradley’s father, Craig, wrote in an email to LDS Living. She had many long-held friendships with members of the Church and had questions. She called the mission office to ask for missionaries to come and answer her questions, took the discussions, and was soon baptized despite some opposition from her family.

“They figured she was just going through a 'phase.’ She subsequently gained a powerful testimony of the Book of Mormon that endures to this day,”  Craig said. “Thirty-two years later she is still in her 'phase.’”

On his father’s side, Bradley’s grandparents came in contact with the gospel in the early ‘60s.

Craig writes, “My mother's testimony was underpinned by the Book of Mormon. The question came up about 'baptising' my oldest brother as an infant and she found an answer in the Book of Mormon that resonated truth to her.  In addition, the Lord very directly answered her prayers about the truthfulness of the Church.” He continues, “My father, a humble man, was able to follow Mum's lead in also accepting the truthfulness of the gospel and they were baptised.”

► You may also like: Do You Feel the World Has Gone Crazy? Nashville Tribute Band Has the Perfect Solution & Music Video for That

Craig says his own testimony was built on his parents’ example and then on a powerful witness of the Book of Mormon and Doctrine & Covenants 76 that he received at the age of 17.

On his Facebook page, Elder Bradley Willson shared the video made by his mission with the caption, “Serving my Mission has been the greatest gift Jesus Christ ever gave me.”

The Prophet Joseph Smith once prophesied, “The truth of God will go forth boldly, nobly, and independent, till it has penetrated every continent, visited every clime, swept every country, and sounded in every ear, till the purposes of God shall be accomplished, and the Great Jehovah shall say ‘The work is done.’” Certainly Elder Willson, his family, and fellow missionaries are evidence of the continued fulfillment of this prophecy.

The missionaries in Pocatello are not the only ones covering Nashville Tribute Band, check out another of our favorite recent covers of “Children Go Where I Send Thee,” performed by three elders in Norway below.