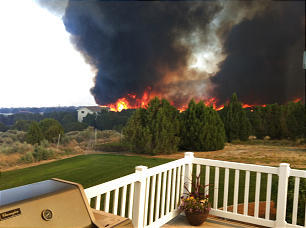 Early in the afternoon of June 28, Elder Tom Atkins received an unexpected phone call from his son, Dallen. The news wasn't good. A wildfire was spreading near the Atkins family home nestled in the juniper-lined hills on the southern edge of Pocatello. He hung up and hoped for the best. Elder Atkins and his wife, Sister Jean Atkins, who are serving a family history mission together in Salt Lake City, had lived in the home for three decades. It had never been threatened by fire.

Dallen called back 45 minutes later with a grim update. The home was gone. After notifying their mission president, Elder and Sister Atkins embarked on the sobering drive back to Pocatello. When the flames of the 1,000-acre blaze were doused days later, the couple was allowed to visit the charred ruins of what had been their home. They were staggered by the scale of the destruction. Little remained outside of a few blackened knickknacks and a treasured family Nativity set. Even the contents of a small fire safe had been destroyed.