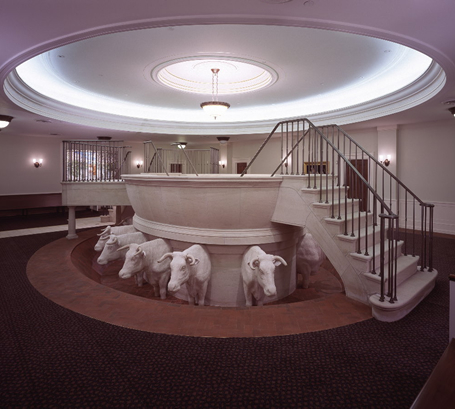 Podcast: Communicating About the Temple

Mormon temple practices have come under renewed scrutiny recently as it has come to public attention that Mitt Romney’s father-in-law, a known non-religious person, had recently had temple ordinances performed on his behalf, and, in an even more emotionally charged case, that the names of the parents of well-known concentration camp survivor and Nazi hunter Simon Wiesenthal had been submitted for having baptism and other temple ordinances performed for them vicariously. (After recording this episode, we have learned that famous concentration camp victim, Anne Frank, has also just had temple work performed on her behalf in the LDS temple in theDominican Republic.) These events have ignited a new round of controversy over the Mormon practice of proxy ordinances for the dead, especially as theLDSChurchand Jewish leaders have several times come to strong agreement that no temple work would be done for Holocaust victims unless they were direct ancestors of contemporary Latter-day Saints. Given these pledges, how did this happen again? What is the nature of the submission processes that allow violations like this to occasionally still take place? Are there ways to stop it from happening again? In addition to the uproar over these breaches of agreements, these recent incidents have once more stirred strong feelings, as well as revealed a great deal of confusion, about just what it “means” for someone to have had their temple work performed for them after they are dead. It also has highlighted confusion on the part of both Jews and Mormons about why the other group can’t really understand their position on the impropriety or propriety of performing these ordinances.

In this episode, Mormon Matters host Dan Wotherspoon and panelists Jana Riess, Jared Anderson, Charles Randall Paul, and Jennifer Rooney White tackle these topics and share some great insights. But more important than discussing these recent events and confusions, the panelists explore many ways that Mormons might use this current moment to learn to better communicate about LDS temple work to those both outside and inside the faith–and arrive at several provocative ideas. Much to chew on in this episode!

Podcast TemplesPodcast,Temples,
Comments and feedback can be sent to feedback@ldsliving.com