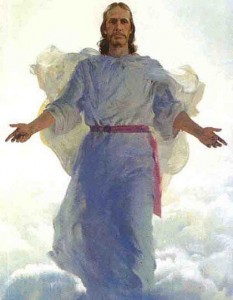 Elder Boyd K. Packer’s October 2011 General Conference encouragement to youth to not fear that because of the Second Coming of Jesus Christ they will not have a chance to have a full life, including having children and grandchildren, is the latest in what seems to be a trend among LDS leaders to de-emphasize the kind of apocalyptic thinking that was prevalent among Mormons even just a few decades ago. Yet class discussions during recent lessons in the priesthood and Relief Society manuals on the signs of the Second Coming, what will happen upon Christ’s return, the Millennium, and the Final Judgment all reveal that “we are living in the end times” thinking is still very much alive and well within Mormonism, with those doing most of the talking in classes still seeming to believe Christ’s coming and world’s end is immanent–perhaps even within their own lifetimes. Clearly it’s time for major discussions on this subject!

What are the scriptural roots of the Christian expectation of Christ’s second coming? How do these match up with apocalyptic visions from other traditions? What unique ideas do Mormons bring to end-times thinking? Is the violent vision of the world’s end set in stone, or are there chances for human beings to change the outcome? If someone feels like she or he cannot believe scripture and teachings about the Second Coming literally, are there still positive framings about preparing for the end of the world or the idea of Christ coming that they might be able to adopt?

In this episode, Mormon Matters host Dan Wotherspoon and panelists Jared Anderson, Charles Randall Paul, and Kenton Karrasch dive deep into all of these issues and many others! It’s a big subject and a long-ish episode, but the recording still only scratches the surface. We hope you will listen and then contribute to a vibrant additional discussion in the comments section below!