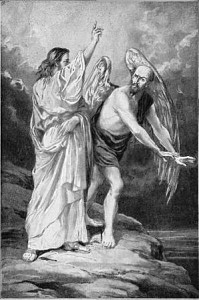 Podcast: Mormon Views on Satan and the Origins of Evil

Most religions, cultures, and philosophies contain stories or theories about human evil and its origins. Some, including Mormonism, place a major portion of the blame for moral evil on a fallen angel, Lucifer, and his followers, who after being ousted from heaven become devils whose only desire is to thwart God’s plans and make loathsome humans as miserable as possible. What many Latter-day Saints don’t realize is how much their version of the war in heaven and the role of Lucifer, who becomes known as Satan, differs from that of wider Christianity, Islam, and the hints of the story found in the Bible. What are these other stories? What are the major differences between the narratives? How much has the story or emphases changed within Mormonism since its earlier periods? Does Mormon theology contain starting points and theological angles for viewing the Satan story powerfully as mythos rather than literal history? Has a shift already begun in how most Latter-day Saints view the sources of temptation they face in their own lives? What principles within Mormon theology might an LDS person draw on to create room for also honoring insights about the nature of evil and human propensities toward sin from eastern religions or certain psychological schools?

In this episode, Mormon Matters host Dan Wotherspoon, along with panelists Boyd Petersen, Charles Randall Paul, and Chelsea Shields Strayer explore all these questions, plus engage in a fascinating peek at how evil is seen in some non-Western cultures, including West Africa (where Chelsea has been doing anthropological fieldwork for the past decade) and its ideas of that very real powers that work in witchcraft, spirit possession, cursing, and other “occult” practices? Does Mormonism have theological explanations for these forces and the various ways they are manifest? Do West African Mormons still hold on to some of these ideas even after their conversion?