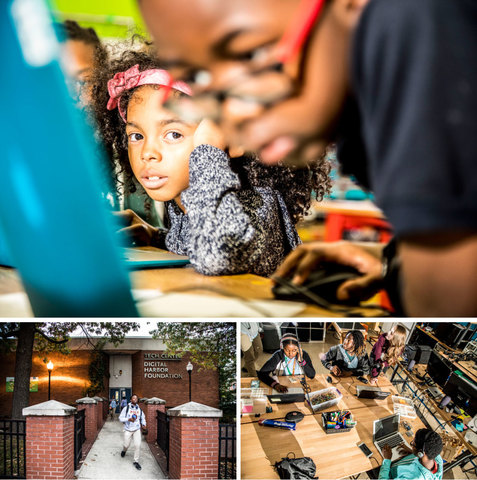 Now this is the way to make education engaging for kids.

Zion Greene and Damion Saunders are building a robot out of Crayola markers, a plastic cup, a DC motor and a piece of foam pool noodle. “What if we made a chain belt, like chains on a bike?” asks Zion, 14, as he threads a rubber band around the motor’s tiny bit.

In a vast room inside a former recreation center, 25 middle school and high school kids are tinkering, testing and inventing. At five tables, kids try to build artbots, three-legged machines designed to move and leave marks on paper. Across the room, kids are sticking red, yellow and green LED lights into circuit boards, then typing code into laptops to make them turn on. Nearby, a 3D printer darts to and fro with a white-noise shhhh, emitting a faint odor of burning plastic as it produces a yellow pendant etched with a honeycomb pattern.

It’s late afternoon and kids from Baltimore and beyond are gathered for after-school courses at the Digital Harbor Foundation, a nonprofit laboratory that has a serious mission to inspire children living in the city’s core to play with technology as eagerly as they do video games. In the middle of the room, Shawn Grimes, the 37-year-old executive director of Digital Harbor, stands up his own artbot: a foam noodle-topped cup that vibrates on three pencil legs. Damion, 11, watches from the next table. “Let’s re-create that,” Damion says to his partner, reaching for some pencils.

“Not re-create, but better,” Zion replies.

Five years ago, Digital Harbor turned a shuttered Baltimore rec center into a vibrant tech center and now regularly draws dozens of kids a week to take courses that promote STEM education—the much-coveted package of science, technology, engineering and mathematics skills—without making it sound like work. That’s the idea behind “maker education,” a movement that promotes a 21st-century version of learning by doing. Maker spaces for kids have started up around the country in the past decade, teaching tech-savvy, project-based lessons, including 3D printing, and website, game and app design, to the post-millennial generation.