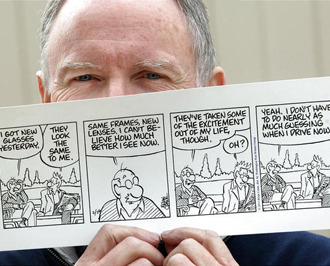 Ever since he was a little boy reading the newspaper, Brian Crane has been fascinated by comics. His favorite was Al Capp's "Li'l Abner," followed by Walt Kelly's "Pogo."

"The political and social commentary were over my head, but the characters were so well-drawn and creative," Crane said. "They worked on many levels."

Whenever his mother and father went off somewhere, they always brought him back comic books. Once he realized that people drew comics and made up the stories, he began to think about drawing his own.

"Mother recognized his talent at a early age," said another sister, Linda Hinckley. "She had him take one of those art courses — one of those 'can you draw this head' things that you found ads for in the back of comic books. She was good at art, but he liked cartoons. His drawings were always funny, cute — with a dry, droll sense of humor. Mother kept a lot of them."