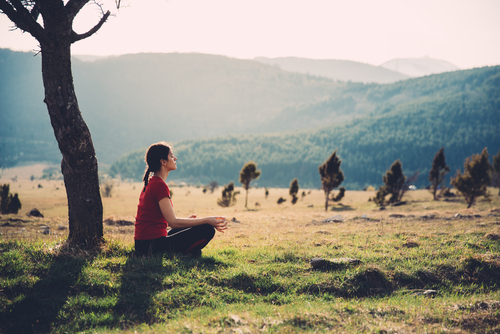 Prayer, mindfulness, and meditation: How one woman is fighting adrenal fatigue

Being diagnosed with adrenal fatigue is just what it sounds like—utterly exhausting. For Janet Hales, that even meant walking slowly for five minutes was almost more than she could endure.

In a recent article for Deseret News, Hales, a Latter-day Saint, says her doctor told her that she needed to significantly reduce her levels of stress if she wanted to improve her condition.

Hales then spoke with her bishop, who highlighted the power of meditation and its connection to prayer. She realized that starting to meditate could potentially offer her exactly what she needed—not just reduced stress but also a stronger relationship with God. As Hales added mindfulness and meditation practices in her life, coupled with prayer, she was impressed by the powerful results.

► You may also like: Avoiding spiritual burnout: slowing down and finding personal serenity

Some may wonder how prayer and meditation work together, or if these practices are mutually exclusive. Hales recognizes similarities between prayer and meditation: “When I meditate, I sit down, open myself up, and begin to breathe and go deep. When I pray, I open myself up, and I begin to approach the throne of God.” She also notes that choosing to meditate has made a huge difference in her prayers as well as her health.

► You may also like: Recognizing stillness in gospel living

Hales encourages all to try out mindfulness and meditation practices—whether you have fatigue or not—by establishing a consistent habit. For her, consistently practicing these skills has paid off. Although she is still recovering, she has become strong enough to run.

Read her full story at Deseret News. The article also discusses the differences between mindfulness and meditation, as well as tips for how to get started.