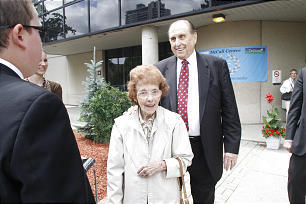 Returning "home" to Toronto, President Thomas S. Monson greeted long-time friends and acknowledged members of the growing Church in Canada as he attended a sacrament meeting on June 26.

As he entered the chapel, he paused from time to time to shake hands or embrace a few local gospel stalwarts he has known since he presided from 1959-62 over the Canadian Mission, which had its headquarters in Toronto. Expressions of joy were shared as he reached out to Everett Pallin, who was his counselor in the mission presidency, and June Pallin, and acknowledged others, shaking hands with as many as he could reach and waving to those he could not. In addition to the Pallins, other acquaintances were: Joseph and Gladys Willmott, Malcom and Helen Warner, Bruce and Dolina Smith, Ethel Stewart and her son, Robert, Douglas and Thelma Dalgleish, Douglas McGinn, Ralph and Mary Culp, Richard and Mary Coatsworth, Manfred and Margaret Schulzke and Stephen and Shirley Hadley.