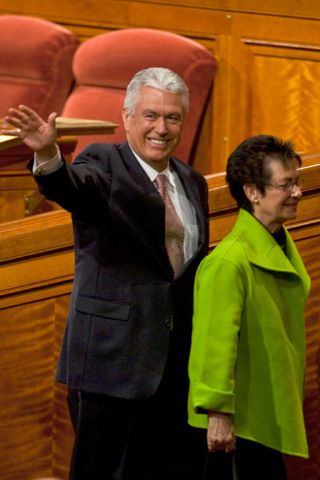 Mormons may not know until the hereafter what causes same-sex attraction, but “God loves all his children” and expects everyone to do the same, an LDS Church leader said Sunday.

While the message — delivered to more than 200,000 Utah Mormons — may not seem significant, the messenger was.

As second counselor in the governing First Presidency, Dieter F. Uchtdorf is one of the highest-ranking leaders in the hierarchy of the nearly 14 million member Church of Jesus Christ of Latter-day Saints to address the thorny topic of whether same-sex attraction is inborn.

The gentle tone and emphasis of Uchtdorf’s remarks — spoken at the Conference Center in downtown Salt Lake City and beamed to dozens of church buildings — came in the wake of an earlier speech by Boyd K. Packer, senior member of the LDS Quorum of the Twelve Apostles.