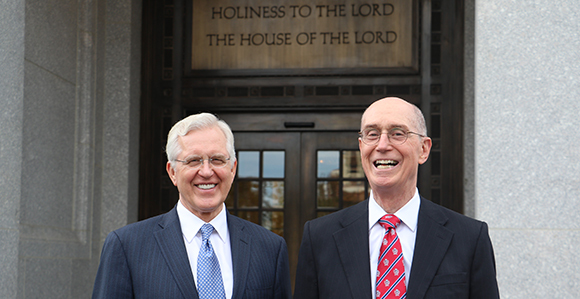 A building with a unique history, the beautiful Philadelphia Pennsylvania Temple was dedicated this weekend following a cultural celebration entitled "We the People." (See photos of the beautiful interior or a video that takes you on a virtual tour of the temple.)

The temple received quite a bit of attention during the open house, including being praised by the Philadelphia Inquirer as well as receiving a large group of Amish visitors.

Not too many years ago, President Henry B. Eyring returned to the small rock chapel in Philadelphia where he was baptized a member of The Church of Jesus Christ of Latter-day Saints. He studied the mural of Lehi’s dream, still gracing the building. Then, as he walked down the old stairway that led to the baptistry, he remembered the feelings he had there as a child.

“That is where so much began,” President Eyring, First Counselor in the First Presidency, told the Church News. The Church in the area “was so small then. Yet now we have a temple of God in one of the most prominent places in Philadelphia.”

Threads of American history, Church history, and President Eyring’s personal history come together in Philadelphia—weaving a beautiful tapestry that was completed when the Church leader dedicated the Philadelphia Pennsylvania Temple on September 18.