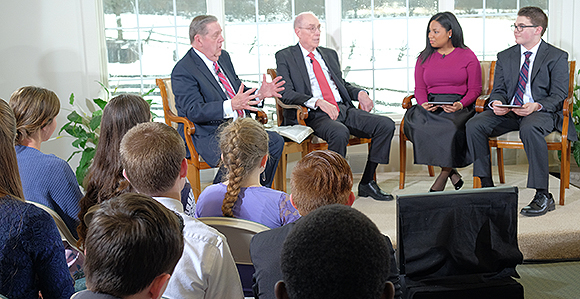 Shortly after the Church premiered a new video of the First Vision, President Henry B. Eyring and Elder Jeffrey R. Holland spoke to the youth of the Church in a broadcast from Palmyra, New York, in a historic event.

“For those of you in the audience wondering if Heavenly Father knows you, oh, my, does he know you. He is watching you and he knows everything about you,” President Eyring told youth during the March 4 Face to Face worldwide broadcast.

Youth submitted more than a thousand questions on LDS.org and thousands more on Facebook, Instagram, and Twitter in preparation for this event. President Henry B. Eyring, First Counselor in the First Presidency, and Elder Jeffery R. Holland of the Quorum of the Twelve Apostles took turns answering some of the questions related to the 2017 Mutual Theme “Ask of God.”

In a venue located near the Joseph Smith family farm and the Sacred Grove in Palmyra, New York, President Eyring and Elder Holland were joined by a group of youth from upstate New York and two youth groups from Plymouth, England, and Johannesburg, South Africa, who participated via video conference, along with thousands of other youth all over the world.

“My dear young friends, I am grateful to be with you today in this sacred place. The fact that you have chosen to participate with us in this broadcast says something important about you,” President Eyring said.

Topics of the questions from youth included listening to the Holy Ghost, improving scripture study, sharing the gospel with others, being a good example to family and friends, personal revelation, how to access the Lord’s Atonement, and more.