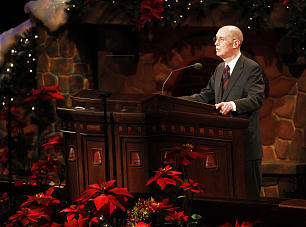 One of the most beautiful symbols of the birth of Jesus Christ into this world is light, said President Henry B. Eyring, first counselor in the First Presidency, on Dec. 4.

"The appearance of the long-promised Messiah brought light to a darkened world," he said.

Speaking during the First Presidency Christmas Devotional, President Eyring said Latter-day Saints know from the true record in the Book of Mormon that God's prophets had long taught the people that light would be a sign of the birth of the only begotten Son of God in the flesh.