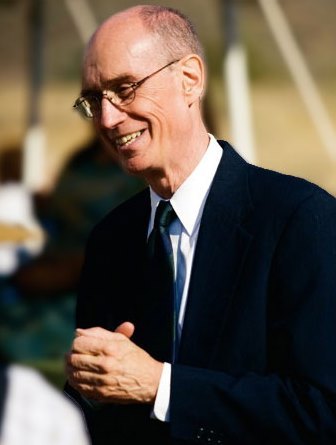 President Eyring’s Humorous Call to the First Presidency: "Are You Sure You’re Talking to the Right Person?"

While taking out the trash at home one day, Henry B. Eyring received a phone call from President Gordon B. Hinckley, who was then the prophet. Surely he had the wrong number, the then-Elder Eyring thought. He had no way of knowing the magnitude of what he was about to hear.

Uncertainty shaped Hal’s response to a phone call that came to the Eyring home on the Thursday evening before general conference. He had left the office a bit before five o’clock and driven home. After parking the car, he walked down the Eyrings’ steep driveway to retrieve an empty garbage can. He was wheeling the can up the driveway when his wife, Kathy, stepped into the open garage with a portable phone.

► You'll also like:21 Inspiring Pieces of Art by President Eyring

“I know who this is!” President Hinckley replied. The ensuing conversation was short. Hal accepted the call, saying he would do anything President Hinckley asked and that it would be an honor to serve with him and President Monson. President Hinckley bade Hal good-bye with no more explanation or expression of emotion than he had offered in calling him into the Twelve. Hal put the garbage can away and shared the news with Kathy.

Learn more about President Eyring's life in I Will Lead You Along: The Life of Henry B. Eyring. Readers will love these richly designed pages, filled with photographs, sketches from the pen of President Eyring himself, and scores of entries straight from his journals woven into an engaging depiction of his life's journey.