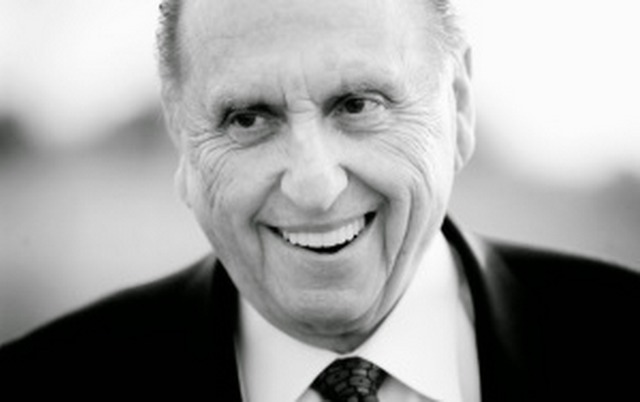 President Monson: I Heard What You Said to Us

MR says: We are all love and pray for our prophet, and it's natural to show our concern for him. But we must also remember to listen to the words he shared and the counsel he has sacrificed to give us--counsel that can change our lives. For like King Benjamin, President Monson can say, "my whole frame doth tremble exceedingly while attempting to speak unto you; but the Lod God doth support me and hath suffered me that I should speak unto you" (Mosiah 2:30).

General Conference this past weekend was super special to me.

I know, they’re all special. But this one sticks out.

For the past couple of years I’ve been working during General Conference, which means I’d usually catch it later, picking through the talks I wanted to read later on. But this year it was LIVE. And I was present, ready to be taught. Not only that, but I didn’t actually SEE it for the majority of the time. I simply heard it. I was driving home from Utah with General Conference tuned in on the radio. And it was just me, the open road, and the words of prophets filling my empty car.

Because of that, I didn’t see President Monson’s legs fail him. I simply heard his words. I count myself blessed for that.

Since General Conference, I have seen and read countless posts, blogs, articles, and statuses revolving around our sweet prophet’s diminishing health. Since conference I’ve seen the videos, I’ve seen the photos, and I’ve felt a pit of sadness in my stomach when I think about how as his age increases and his voice becomes quieter, it ticks away the time we have left with him. I too am saddened at that. But I think that something else that is sad is the fact that there are so many articles revolving around his poor health-–and so little revolving around what he actually said to us that day.

Lead image from Our Lemmony Things.

Read the rest of this story at lemmonythings.wordpress.com