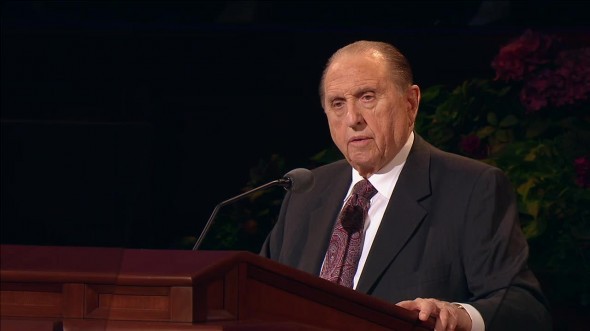 Many members were caught off guard this conference when President Thomas S. Monson, 87, did not give his customary greeting during the Saturday morning session of general conference. President Monson did later give addresses at the Priesthood session, and again on Sunday morning.

Because of the adjusted schedule, he announced three new temple sites Sunday morning, an event that usually takes place during Saturday sessions.

This is only the second time President Monson has missed giving his welcoming address since being called as prophet in 2008. The other time was in October 2011.

In a statement given Saturday, church spokesman Dale Jones said, "President Monson has chosen to reduce the number of talks he will deliver this conference," citing that "over the years various formats have been used in general conference programs."

The change was noted by media outlets, including ABC News and the Salt Lake Division of Fox News.

Earlier in the week, President Monson elected to send other Church leaders to a meeting with US President Barack Obama. Church spokesman Eric Hawkins explained the decision, saying, "Because of the need to preserve his strength for this weekend’s general conference, it was felt that the logistics of meeting away from Church offices, with the walking and the waiting periods associated with a presidential visit, would regrettably not be conducive to President Monson’s participation."

Some members may also have noted that Elder Richard G. Scott also did not attend the Saturday morning session, which Jones said was "for health reasons." He reportedly watched conference from his home.

However, while the Church has never had an older First Presidency and Quorum of the Twelve Apostles, Church members shouldn't worry about the efficaciousness of the group.

"While each feels his own limitation," President Boyd K. Packer has said, "there is strength in unity. Never in the history of the Church have the Brethren of the First Presidency and the Twelve been more united."

Each member's duties vary according to age and health, but between the 15 men, everything gets done.