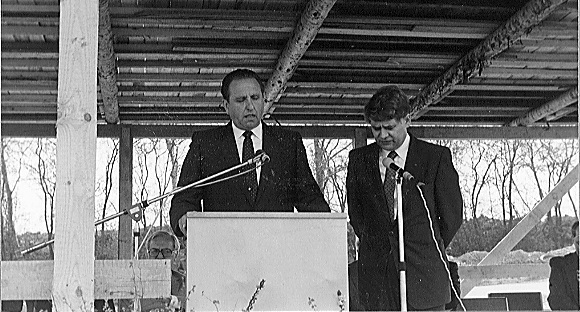 In his book Faith Rewarded, President Monson shared this touching memory from the groundbreaking of the historic Freiberg Germany Temple, which was the first temple built in a communist-ruled country. As a member of the Quorum of the Twelve Apostles, President Monson was assigned to the German Democratic Republic, also known as East Germany, to oversee the work of the Church there.

► You'll also like: President Uchtdorf: "The Impossible Is Being Made Possible Through Our Heavenly Father"

Here's what he had to say about the groundbreaking for the Freiberg Germany Temple in his personal journal:

Drove today to Wittenberg and saw the church where Martin Luther nailed to the door his famous proclamation. A substantial crowd of people viewed the tourist attraction on this lovely and sun-drenched day. An English-speaking guide was most gracious. She would not accept any contribution for herself, simply suggesting that any contribution could go toward the maintenance of the church. We made a contribution for this purpose.

At 2:00 P.M. I had the privilege to preside at the ground breaking for the Freiberg Germany Temple. This is a miracle of miracles! I think it all began when we made a final effort with the government to get permission for our faithful couples to go to the Swiss Temple. The minister in their government then said, "Why not build a temple in our country?" We took him up on his offer, and the building is now under way.

Elder Robert D. Hales, Hans B. Ringger, Emil Fetzer, Amos Wright, and I had journeyed to Freiberg for this occasion. The weather was beautiful. I had previously given Bishop Hales the assignment, with tongue in cheek, to take care of the weather. I said to him, "Elder Hales, the Lord has opened the way for a temple to be erected here in this land far away from freedom, and you have the opportunity now, per my assignment, to be in charge of the weather. I would like you to ensure that we have sunshine to shine upon all who are in attendance for this great occasion!" 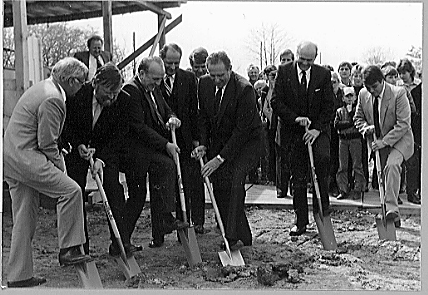 A lovely stand had been erected for the official party, and though we had not made any public announcement, since there was a feeling this was in the best interests of the work, there nonetheless was a nice crowd assembled. As I took shovel in hand and prepared to turn the soil, a member of the Church Building Department said, "Be careful how you lean on the shovel. When Brother Packer broke ground for a new temple in another country, the shovel broke under the weight of his foot." I responded, "German-made shovels don't break." 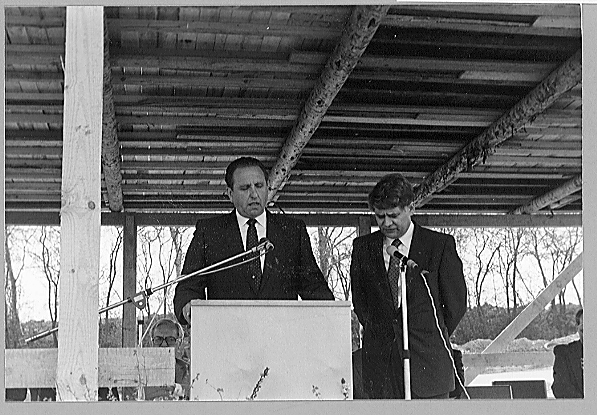 I am overwhelmed with a deep sense of gratitude as I offer a prayer of dedication upon the site where the Freiberg Temple will be constructed.

We went forward with the proceedings, after which it was my opportunity to offer a prayer of dedication on the ground, setting it apart for its special purpose to accommodate a house of the Lord.

We purposely restricted the amount of people in attendance, having just thirty or forty Church officers and their families. We also had visitors from East Germany's Department of Religion and the Architectural Institute, the building contractors in Berlin, and other dignitaries. I think it significant that when I invited all of them to close their eyes and bow their heads that I might dedicate the building, they did so. Brother Von Selchow, our seminary and institute leader, opened his eyes during the prayer and noted that every person there except one had his head bowed. I think this is most significant, considering that the government of the nation is Communist.

We then met at the Freiberg chapel with representatives of the government's architectural division, where we made plans for a temple president's residence on property nearby the temple and stake center site. We also looked at preliminary plans for a building proposed for the Leipzig Branch.

We then returned to Berlin, crossed Checkpoint Charlie, and then went to the downtown section, where I registered at the Schweizerhof Hotel.

I left the German Democratic Republic rejoicing in my heart and soul, now that a temple of God has been approved for construction and the dedication of the ground accomplished.

The Freiberg Germany Temple was rededicated by President Dieter F. Uchtdorf on September 4, 2016, following its renovation. 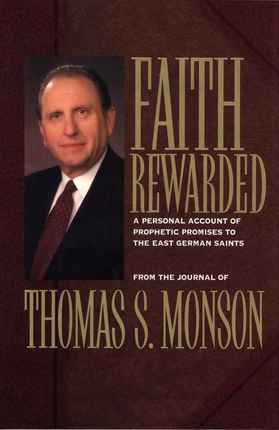 Read more personal journal entries from President Thomas S. Monson in Faith Rewarded: A Personal Account of Prophetic Promises to the East German Saints, available at Deseret Book. He shares his personal journal entries from his visits to the German Democratic Republic—also known as East Germany under communist rule—when he was on Church assignment as a member of the Quorum of the Twelve Apostles.