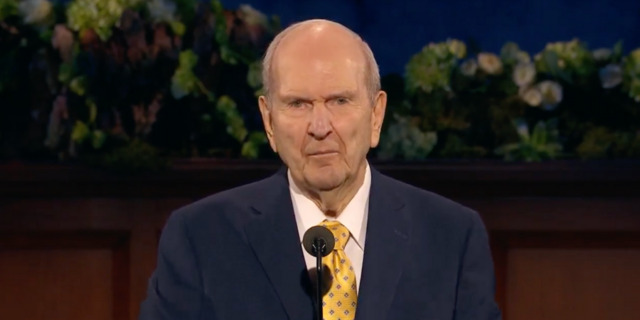 President Russell M. Nelson of The Church of Jesus Christ of Latter-day Saints announced Saturday morning, April 4, 2020, that a portion of the Sunday morning session of general conference will become a worldwide solemn assembly when he leads the Saints in the Hosanna Shout.

► You may also like: What Is the Hosanna Shout and Why Do We Do It?

“We pray that this conference will be memorable and unforgettable because of the messages you will hear, the unique announcements which will be made, and the experiences in which you will be invited to participate,” President Nelson said from the podium of the Church Office Building auditorium. “For example, at the conclusion of the Sunday morning session, we will convene a worldwide solemn assembly when I will lead you in the sacred Hosanna Shout. We pray that this will be a spiritual highlight for you as we express in global unison our profound gratitude to God the Father and His Beloved Son by praising Them in this unique way.”

Honoring Deity in this way is an especially important and holy symbol as the Church celebrates in this general conference (and throughout the year) the bicentennial of Joseph Smith’s First Vision of the Father and the Son. It was in that vision that the Father, pointing to Jesus Christ, told the teenage Joseph, “This is My Beloved Son. Hear Him!”

What is a Solemn Assembly?

Solemn assemblies are special, sacred meetings held for a variety of holy purposes. They require Latter-day Saints to bring an elevated sense of spirituality with them into the meeting. These assemblies have included the sustaining of new Church presidents, the dedication of a temple or another significant building (such as the Conference Center), the introduction of new scripture, the instruction of priesthood leaders and other special gatherings. The specific purpose of Sunday morning’s solemn assembly, outside of the Hosanna Shout, will be addressed by President Nelson during his remarks.

“Solemn assembly” is a phrase from the Hebrew Bible that describes significant gatherings that occurred during Passover and the Feast of Tabernacles. The first temple in Jerusalem was dedicated during the time of a solemn assembly. Thus, the term has an ancient connection with temple dedication.

The Doctrine and Covenants, a collection of sacred revelations for the Church, contains several references of God asking Latter-day Saints to “call your solemn assemblies” (Doctrine and Covenants 133:6). The dedication of the Kirtland Temple on March 27, 1836, was one such occasion. Many witnessed an outpouring of spiritual manifestations at that time. That landmark temple dedication set a precedent for later solemn assemblies.

What is the Hosanna Shout?

The Hosanna Shout is a way for Latter-day Saints to give honor and praise to God the Father and His Son Jesus Christ. This is an especially notable act to take place as the Church celebrates the bicentennial of Joseph Smith’s First Vision of Deity.

The shout is a symbol of how the crowds reacted to Jesus during his triumphal entry into Jerusalem during the last week of His life. “Hosanna to the Son of David: Blessed is he that cometh in the name of the Lord; Hosanna in the highest,” the New Testament record says.

Hosanna comes from two Hebrew words that, as used in Psalms 118:25, are rendered in the King James Version as “Save [us] now, I beseech thee.” In the Mosaic law, a priest recited this psalm each day during the seven-day Feast of Tabernacles, when the people were commanded to “rejoice before the Lord” (Leviticus 23:40). The Feast of Tabernacles was a time of exultation for the ancient Israelites. Thus, the Hosanna, though supplicatory at first, became associated with rejoicing. This is also its meaning in the New Testament, the Book of Mormon and the Doctrine and Covenants. In these texts, hosanna is a recognition of and praise for the goodness of God and the saving power of Jesus Christ.

The history of the use of “hosanna” in The Church of Jesus Christ of Latter-day Saints goes back to before the Church was formally organized in 1830. In an 1829 revelation, Martin Harris was commanded to “preach, exhort, declare the truth, even with a loud voice, with a sound of rejoicing, crying—Hosanna, hosanna, blessed be the name of the Lord God!” Similar commandments were given to individuals in 1830 and 1831.

The Hosanna Shout became a collective membership experience at the 1836 dedication of the Church’s Kirtland Temple. Near the conclusion of the dedicatory services, the congregation joined in shouting three times: “Hosanna! Hosanna! Hosanna to God and the Lamb, Amen, Amen and Amen!” Historically, other events throughout the history of the Church have been graced with the Hosanna Shout.

Since the 1892 capstone ceremony of the Salt Lake Temple, the Hosanna Shout has been done while waving a white handkerchief. “For this sacred experience, we use clean, white handkerchiefs,” President Nelson explained Saturday morning. “But, if you do not have one, you may simply wave your hand.”

At the conclusion of Sunday’s Hosanna Shout, the congregation will join in singing “The Spirit of God,” just as was done at the Kirtland Temple dedication.