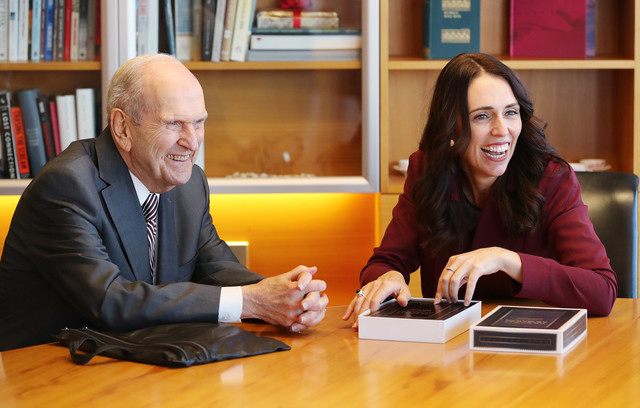 In his recent meeting with New Zealand Prime Jacinda Ardern, President Russell M. Nelson presented the prime minister with a Book of Mormon and spoke on a variety of important topics, including freedom of speech, religious freedom, social media, internet security, and the March 15 mosque shootings in New Zealand. “Our hearts were broken when we heard about the tragedy that had taken place and the loss of life," President Nelson said. "People can have differing points of view and yet learn and love one another.”

"We're clearly sensitive to what's happened there," Elder O. Vincent Haleck, president of the Church's Pacific Area Presidency, added. "Our hearts were broken when we heard about the tragedy that happened and the loss of life, and so the church is reaching out as it does in these kinds of situations in other parts of the world to lend a hand, to be there for our brothers and sisters who are of another ethnicity and another religious group. That doesn't matter to us. We're there to help and that's the reason why we are helping and continue to help, not just for tomorrow but continuing."

On her first day back at work after a triumphant trip to Paris that substantiated her No. 2 ranking on Fortune's list of the world's greatest leaders, New Zealand Prime Minister Jacinda Ardern welcomed President Russell M. Nelson, leader of The Church of Jesus Christ of Latter-day Saints.

President Nelson told Ardern the church will make donations Tuesday night to leaders of the two mosques where a gunman killed 51 people in attacks on March 15 in Christchurch, 270 miles south of here.

"We will be making contributions to those mosques to help them repair from their damages," he said.

He called it a great privilege to meet with her and praised Ardern's leadership in the wake of those attacks.

"She's courageous," he said, adding, "The world will discover they've got a real leader here. It's an unlikely scenario, a young mother leading a great nation, a peacemaker, a policymaker, a consensus-builder. We're very confident she'll have a great future."