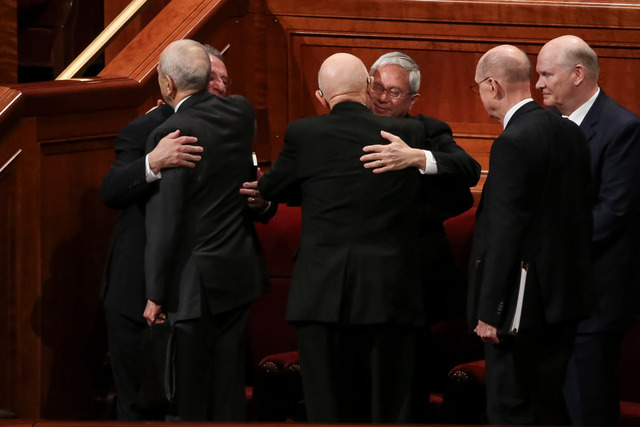 President Nelson Shares His Experience Calling New Apostles: "They Were Called Because of Who They Would Become"

While in Jerusalem, KSL's religion specialist Carole Mikita asked President Nelson what it was like calling two new apostles shortly before traveling to the holy city where Jesus Christ called his original twelve apostles.

"What I thought would be a formidable task was made easy by the Lord," President Nelson said of calling two new apostles shortly after becoming our prophet. "He made it clear to me they would be called because of who they would become. The future will be molded by these two new men."

His words reflect the message shared by President Thomas S. Monson in October 2012 general conference: "We must develop the capacity to see men not as they are at present but as they may become." And it is clear both our new apostles understand the shaping role of their callings as each mentioned in their first message to Church members their hope of becoming who the Lord wants them to be. Elder Gong said, "On this Easter Sunday, I humbly pledge all the energies and faculties of my soul, whatever they be or become, to my Savior, to my dear Susan and our family, to my Brethren, and to each of you, my beloved brothers and sisters." Elder Soares shared,"I love [Jesus Christ]. I adore Him. I want to follow Him, do His will, and become more like Him."

During his recent general conference address during the April 2018 Sunday session, President Nelson shared more about this process of making decisions impacting the Church:

In like manner, I testify that the Lord inspired the call of Elder Gerrit W. Gong and Elder Ulisses Soares to be ordained as His Apostles. I and we welcome them to this unique brotherhood of service.

When we convene as a Council of the First Presidency and Quorum of the Twelve, our meeting rooms become rooms of revelation. The Spirit is palpably present. As we wrestle with complex matters, a thrilling process unfolds as each Apostle freely expresses his thoughts and point of view. Though we may differ in our initial perspectives, the love we feel for each other is constant. Our unity helps us to discern the Lord’s will for His Church.

In our meetings, the majority never rules! We listen prayerfully to one another and talk with each other until we are united. Then when we have reached complete accord, the unifying influence of the Holy Ghost is spine-tingling! We experience what the Prophet Joseph Smith knew when he taught, “By union of feeling we obtain power with God.”7 No member of the First Presidency or Quorum of the Twelve would ever leave decisions for the Lord’s Church to his own best judgment!

But this transforming power is not limited to our apostles. As President Nelson shared on Facebook:

In a coming day, you will present yourself before the Savior. You will be overwhelmed to the point of tears to be in His presence. You will struggle to find words to thank Him for paying for your sins, for forgiving you of any unkindness toward others, for healing you from the injuries and injustices of this life.

You will thank Him for strengthening you to do the impossible, for turning your weaknesses into strengths, and for making it possible for you to live with Him and your family forever. His divine identity, His purpose, His Atonement, and His attributes will become personal and real to you.

But you don't have to wait until then. Choose to be one of His true followers now. Be one who truly loves Him, who truly wants to serve and lead as He did.

Lead image by Spenser Heaps from the Deseret News