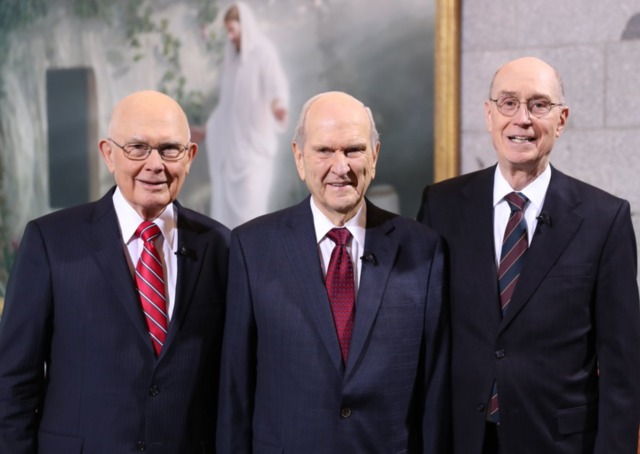 President Nelson's First Message to Members as Our Prophet

"Four days ago we laid to rest a giant of a man, a prophet of God, Thomas S. Monson," President Russell M. Nelson began his first address as the 17th prophet of The Church of Jesus Christ of Latter-day Saints. In this unprecedented broadcast, President Nelson spoke from the annex of the Salt Lake Temple, paying tribute to President Thomas S. Monson.

"Now, we must look forward to the future, with complete faith in our Lord Jesus Christ," President Nelson said. He assured Church members "the Lord is at the helm" directing His Church, as He has in the past.

President Nelson spoke of the sacred experience meeting with his fellow apostles in the upper room of the temple on Sunday to sustain a new prophet.

"Words are inadequate to tell you what it felt like to have my Brethren—Brethren who hold all the priesthood keys . . .—place their hands upon my head to ordain and set me apart as president of the Church. It was a sacred and humbling experience," President Nelson said.

Of the daunting task of selecting new counselors for the First Presidency, President Nelson said, "How can I choose only two of the twelve apostles, each of whom I love so dearly? I am deeply grateful to the Lord for answering my fervent prayers."

“This is a great time in history for the Church, and yes, the best is yet to come,” President Eyring said.

After discussing the changes in the First Presidency, President Nelson addressed Church membership: "To each member of the Church I would say keep on the covenant path."

"As a presidency, we want to begin with the end in mind," he continued, explaining this focus was the reason he chose to address Church members from the Salt Lake Temple. For Latter-day Saints, becoming "endowed in a house of the Lord" should be our continual goal, President Nelson said, one which will "qualify us for the greatest gift of God," which is eternal life with our Heavenly Father.

Staying on the covenant path "will open the doors of every spiritual blessing and privilege available," President Nelson said.

For those who do not yet qualify to enter the temple and to all within the Church, President Nelson said, "whatever your concerns, whatever your challenges, there is a place for you in this the Lord's Church. . . . Our Father in Heaven cherishes His children and wants each of them to return home to Him."

He continued, "I express my great love for you, one that has grown over decades of meeting you, worshipping with you, and serving you."