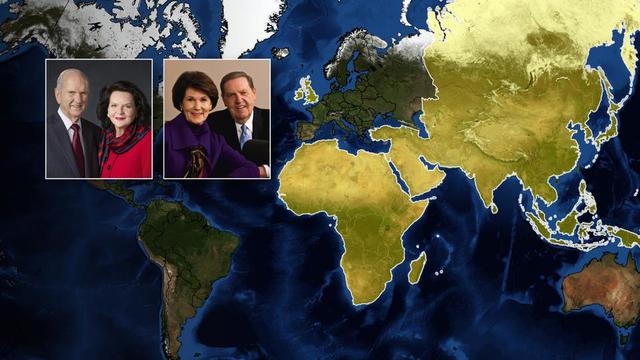 President Nelson and Elder Holland to Embark on World Tour

On February 20, Mormon Newsroom announced that President Russell M. Nelson and his wife, Wendy, along with Elder Jeffrey R. Holland and his wife, Pat, will tour the world for two weeks, visiting several countries in Europe, Africa, and Asia.

President and Sister Nelson along with Elder and Sister Holland will depart on April 10 and will return on April 23.

During the trip, these Church leaders plan on meeting with members and missionaries as well as visiting Church sites.

For Latter-day Saints, becoming "endowed in a house of the Lord" should be our continual goal, President Nelson said, one which will "qualify us for the greatest gift of God," which is eternal life with our Heavenly Father.

For those who do not yet qualify to enter the temple and to all within the Church, President Nelson said, "whatever your concerns, whatever your challenges, there is a place for you in this the Lord's Church. . . . Our Father in Heaven cherishes His children and wants each of them to return home to Him."