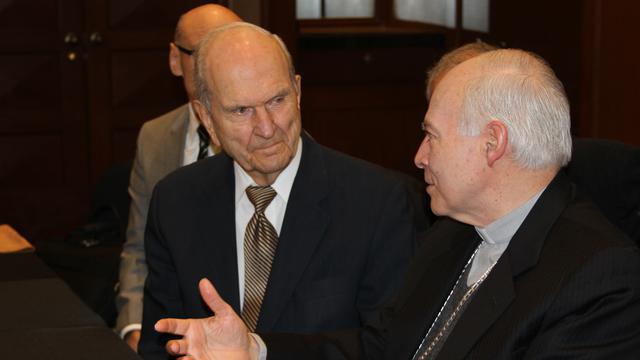 President Nelson met with the Archbishop of the Archdiocese of Tlalnepantla, His Eminence Cardinal Carlos Aguiar Retes, and Mexican legislators in Mexico this month to discuss the work needed to defend the family.

On Tuesday, President Nelson met with members of the Chamber of Deputies (Mexican Congress) to discuss religious freedom and thank the legislators for their work to defend the family.

He told legislators he was grateful to meet with Cardinal Aguiar Retes. “We must forget the titles and do the sacred work that is required to preserve the sanctity of the family.”

The lawmakers invited President Nelson to visit the plenary hall, where he was recognized as a distinguished visitor, a protocol typically reserved for ambassadors and official representatives of other governments or faith leaders such as the pope.

Also in Mexico, President Nelson was greeted by Francisco Garcia Cabeza de Vaca, the governor of the state of Tamaulipas, and his wife.

The governor welcomed President Nelson to his house and extended a greeting to members of the Church.