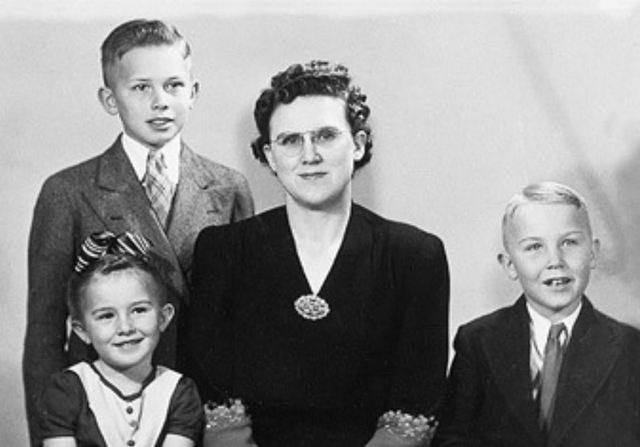 President Oaks: "I Knew I Was the Dumbest Boy In the Room"

The following is an excerpt from President Oaks' book Life's Lessons Learned.

I learned by unforgettable personal experiences that no matter how far a person has fallen, there is always the possibility that with help he or she can recover and proceed forward to better things.

For me, the two years following my father’s death in June 1940 were turbulent and terrible. First, I lost my father. Then, six months later, I also lost my mother for nearly a year.

In January 1941, anxious to qualify herself to earn a living for her three children, Mother left us in Utah with her parents and traveled to New York City to pursue a master’s degree at Columbia University. This proved to be too soon. The loneliness resulting from this separation from her family so soon after the loss of her husband, combined with the rigors of graduate study, strained her beyond the breaking point. In May 1941 she suffered what was then called a nervous breakdown, which required medical supervision away from her family for many months. With faith and priesthood blessings and the loving support of her family, she was able to resume her employability and unassisted parenting in August 1942. Her spiritual and emotional strength was felt throughout the remaining 37 years of her life in her leadership and service in many professional, civic, and Church positions.

Despite the tender care of loving grandparents, my third and fourth grades in school, when I was eight to ten years old, were terribly unhappy for me. I rode a school bus from the farm two miles south of Payson, Utah. The few grade schoolers on this high school bus were buffeted and bullied. I remember having no identity with these fellow travelers and being tossed about like a rag doll. Since the bus stopped at the high school, I had to walk—usually alone—about a mile further to the Peteetneet grade school. If I was late getting back to the bus after school, it was gone, and I had to walk the two more miles home.

I did not like my fourth-grade teacher, a harried older man kept on in those World War II years to teach three rows of fifth and two rows of fourth graders. My most vivid memory of that year is of passing our arithmetic papers forward to be graded publicly and of how the announced results usually put me at the bottom of the class. In a 20-problem exercise, I usually had 15 or 16 wrong answers. I knew I was the dumbest boy in the room. I remember one occasion when some classmates threw snowballs at me and called me stupid.

In August 1942, Mother being much improved, our little family was ready to function unassisted, and we moved to Vernal, Utah, where Mother had obtained a teaching position at Uintah High School. There I was blessed with a stable home and family environment with the guidance of my marvelous mother. I was also blessed with a great fifth-grade teacher, Miss Pearl Schaefer, who was mature and loving. Through a wise combination of confidence and challenge, she put me back on the path of learning and gave me many happy memories.

These experiences taught me firsthand that when a person is not performing well, there are many possible reasons, some not of his own choosing. I am forever grateful for a marvelous mother and a wise and loving teacher. Their faith in me encouraged me in the thought that I could amount to something, as we said in those days.

Given love and opportunity, every child and adult can recover. All who know this and have the capacity to help others should assist as they can. 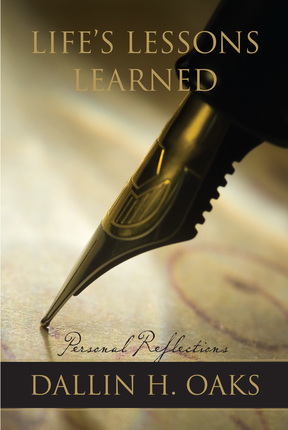 “I have learned things that have shaped my life and teachings, including some things of the heart not previously shared,” writes President Dallin H. Oaks in the introduction to this unique book. “This is an autobiography of learning and application rather than a compendium of doctrine.”

Masterfully blending personal experiences with the doctrines of the gospel, President Oaks invites us to join him on a journey through some of the turning points in his life and the lessons he has learned through a lifetime of devotion to the Savior.

The short but potent chapters offer perceptive observations into such diverse topics as the purpose of adversity, the importance of respecting those with whom we disagree personally or politically, the merits and limitations of law, the blessings of tithing, the seeming conflict between science and religion, the Lord's use of imperfect people to further His work, and the power of the Atonement to recover those who have fallen behind.

President Oaks also relates the very personal lessons he learned from the death of his wife, June, and from his subsequent marriage to Kristen McMain.

Woven throughout the book is President Oak's powerful testimony of the Savior and His mission. Life's Lessons Learned is a rare glimpse into the experiences of the heart that have shaped the life of an Apostle of God.