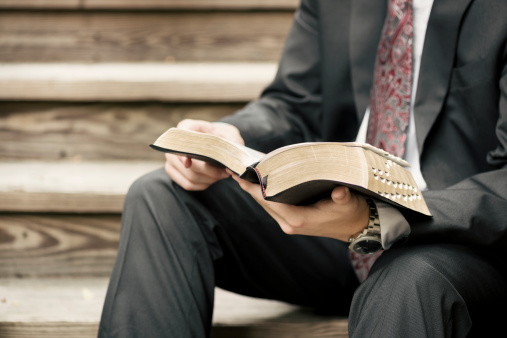 I received a letter from a Church member who posed an unusual question: “Do I have a right to bear testimony of the Savior? Or is that the sole prerogative of the Twelve?” In response, I share some thoughts on why every member of this Church should bear witness and testimony of Jesus Christ.

We witness of Christ by our membership in the Church that bears His name (3 Nephi 27:7; D&C 115:4). The prophet Nephi described the ordinance of baptism into the Church as an occasion when we witness unto the Father that we are willing to take upon us the name of Christ (2 Nephi 31:13). Similarly, the Lord has specified that those who desire to be baptized in this dispensation should “come forth with broken hearts and contrite spirits, and witness before the church that they . . . are willing to take upon them the name of Jesus Christ” (D&C 20:37; Moroni 6:3). We renew that promise when we partake of the sacrament (D&C 20:77; Moroni 4:3).

We are commanded to pray unto the Father in the name of His Son, Jesus Christ (3 Nephi 18:19, 21, 23; Moses 5:8), and to do “all things . . . in the name of Christ” (D&C 46:31). If we follow these commandments, we serve as witnesses of Jesus Christ through our baptism, our membership in His Church, our partaking of the sacrament, and our prayers and other actions in His name.

But our duty to be witnesses of Jesus Christ requires more than this, and I fear that some of us fall short. We Latter-day Saints can become so preoccupied with our own agendas that we can forget to witness and testify of Christ. . . .

How do members become witnesses beyond the mere fact of their membership? The original apostles were eyewitnesses to the ministry and resurrection of the Savior (Acts 10:39–41). He told them, “Ye shall be witnesses unto me both in Jerusalem, and in all Judaea, and in Samaria, and unto the uttermost part of the earth” (Acts 1:8; Acts 10:42–43). However, He cautioned them that their witnessing would occur after they had received the Holy Ghost (Acts 1:8; Luke 24:49).

Apostles have the calling and ordination to be “special witnesses of the name of Christ in all the world” (D&C 107:23), but the duty to witness and testify of Christ at all times and in all places applies to every member of the Church who has received the testimony of the Holy Ghost.

The book of Luke records two examples of this. In obedience to the law of Moses, Joseph and Mary, after forty days, brought the infant Jesus to the temple at Jerusalem to present Him to the Lord. There, two aged and spiritual temple workers received a witness of His identity and testified of Him. Simeon, who had known by revelation from the Holy Ghost that he should not taste of death until he had seen the Messiah, took the infant in his arms and testified to His divine mission (Luke 2:25–35). Anna, whom the scriptures call “a prophetess” (Luke 2:36), recognized the Messiah “and spake of him to all them that looked for redemption in Jerusalem” (Luke 2:38).

Anna and Simeon were eyewitnesses to the infant, but, just like the apostles, their knowledge of the Savior’s divine mission came through the witness of the Holy Ghost. “The testimony of Jesus is the spirit of prophecy” (Revelation 19:10). Therefore, we can properly say that when each received this witness, Simeon was a prophet and Anna was a prophetess. Each then fulfilled the prophetic duty to testify to those around them. As Peter said, “To [Christ] give all the prophets witness” (Acts 10:43). This was what Moses meant when he expressed the wish “that all the Lord’s people were prophets, and that the Lord would put his spirit upon them!” (Numbers 11:29). . . .

In his vision of the spirits of the dead, President Joseph F. Smith described “the spirits of the just” as those “who had been faithful in the testimony of Jesus while they lived in mortality” (D&C 138:12). In contrast, in his vision of the three degrees of glory, the Prophet Joseph Smith described those souls who go to the terrestrial kingdom as the “honorable men of the earth” who were “not valiant in the testimony of Jesus” (D&C 76:75, 79).

What does it mean to be “valiant in the testimony of Jesus”? Surely this includes keeping His commandments and serving Him. But would not it also include bearing witness of Jesus Christ, our Savior and our Redeemer, to believers and nonbelievers alike? As the Apostle Peter taught the Saints of his day, we should “sanctify the Lord God in [our] hearts: and be ready always to give an answer to every man that asketh [us] a reason of the hope that is in [us]” (1 Peter 3:15).

All of us need to be valiant in the testimony of Jesus. As believers in Christ, we affirm the truth of Peter’s testimony in the name of Jesus Christ of Nazareth that “there is none other name under heaven given among men, whereby we must be saved” (Acts 4:12; D&C 109:4). We know from modern revelation that we can come unto the Father only in His name (D&C 93:19). As the Book of Mormon teaches, salvation is “in and through the atoning blood of Christ, the Lord Omnipotent” (Mosiah 3:18; Moses 6:52, 59). To those of us who are devoted to the Lord Jesus Christ, there has never been a greater need for us to profess our faith, privately and publicly. 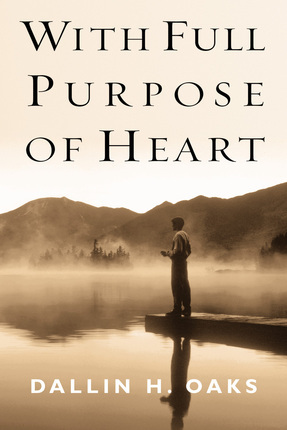 President Dallin H. Oaks, known for his keen gospel insights and precise expression, has been blessing Latter-day Saints with inspired discourses for many years. Now, Deseret Book offers a collection of some of his most popular and powerful addresses in With Full Purpose of Heart. "I hope that bringing them together in one place will facilitate access and cause the persuasiveness of the compiled whole to be greater than the sum of the scattered parts," President Oaks says.