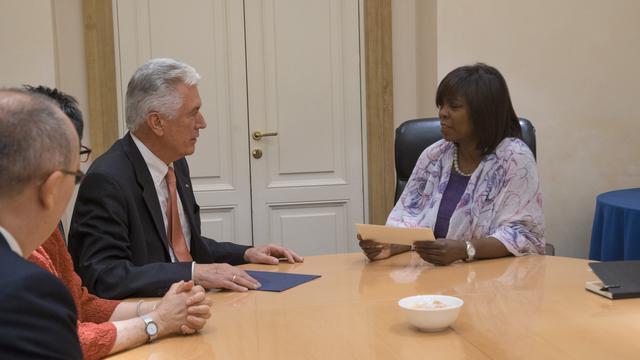 In his recent trip to Italy, President Uchtdorf made the most of his time by climbing to the top of the new Rome Italy Temple site and visiting with refugees at the Piraeus refugee camp.

President Dieter F. Uchtdorf, second counselor in the First Presidency of The Church of Jesus Christ of Latter-day Saints, presented a $3 million donation to the United Nations’ World Food Programme (WFP) on behalf of the Church during a recent visit to Rome, Italy. On July 17, President Uchtdorf met with Ertharin Cousin, executive director of the WFP. The donation will be used to provide food to refugees and displaced people in Cameroon, Chad and Syria.

With 65 million refugees worldwide, the Church is committed to alleviating suffering in all its forms, including hunger.

"I presented a check to the World Food Programme on behalf of [members of the Church]. The generous offerings of our worldwide membership make such a donation possible. Their commitment, their collective resolve to do something, and not just say something, will ultimately make a difference in the lives of God's children," said President Uchtdorf.