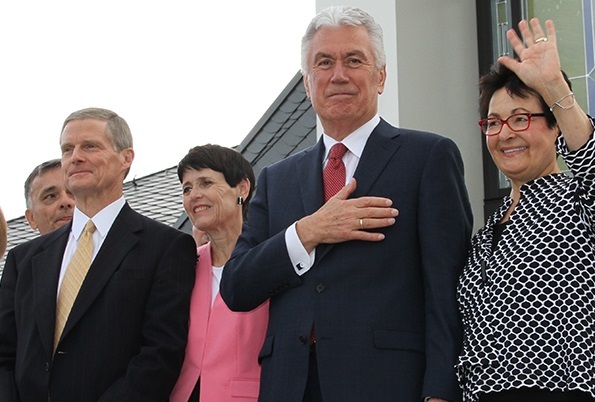 With visible emotion and a heartfelt hand to his heart, President Uchtdorf and his wife, Sister Harriet Uchtdorf, exited the Freiberg Germany Temple following the final dedicatory session on Sunday, September 4. Pausing to hear the members sing “Gott mit euch, bis wir uns wiedersehn” ("God Be with You Till We Meet Again"), President Uchtdorf joined in singing with the members outside the temple.

While every temple dedication and rededication is a special experience for the prophet and apostles involved, this particular temple rededication was especially personal for President Uchtdorf, who has ties to not only the country of Germany, but also the temple region. 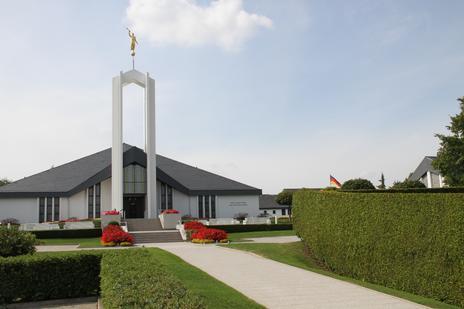 Growing up in Zwickau, Germany, President Uchtdorf lived a short distance from where the Freiberg Germany Temple would eventually stand in Eastern Germany until he was 11 years old.

President Uchtdorf told Church News, "I was baptized not far from the temple site when I was eight-years-old." He and his wife also have many ancestors "from this part of the Lord's vineyard," he said.

However, when President Uchtdorf served in the West Germany air force, he was also expected to target areas like Freiberg in East Germany. "Our assumed targets were in this area of Europe," he said, "and I'm sure we were on their target list.”

After World War II and the Cold War left East Germany and other communist nations suffering economically and socially, the stalwart members of the Church in those regions managed to keep their faith, with help from prophetic words from then Elder Monson of the Quorum of the Twelve Apostles.

Elder Monson promised the Saints in East Germany in 1968 that if they stayed faithful and kept the commandments, blessings would come. Trusting in his words, members fought to stay faithful in a communist country, where freedom of religion was oppressed, and travel to foreign temples was restricted. In 1975, Elder Monson returned to the German Democratic Republic to offer a dedicatory prayer.

Still under communist rule, the communist government surprised members and Church leaders when they approved the Church's plan to build their first temple in a Soviet Bloc nation. The Freiberg Germany Temple was dedicated in 1985, and President Monson's promise was fulfilled to the German saints, who then had access to essential ordinances of the gospel.

► You may also like: President Nelson Shares How He Helped Establish the Church in Communist Countries

Now free from communism, members from all over Europe have access to temple ordinances in the Freiberg Germany Temple. "We are a united people,” President Uchtdorf said. "We are getting closer to each other and we are caring for each other."

President Uchtdorf shares his testimony of the Lord's work in the Freiberg Germany Temple region. "At that time, who would have ever thought that a temple would be built here? But it happened because the Lord takes the improbabilities of life and makes the impossible happen." 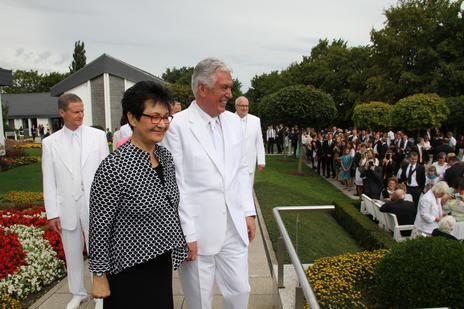 The temple district covers six other formerly communist nations in Europe—Poland, the Czech Republic, Romania, Slovakia, Hungary and Moldova. Youth from many countries in the temple district participated in the cultural celebration the night before the rededication.

"When I looked into the faces of these joyful individuals I felt full of hope and confidence that the Church will grow," President Uchtdorf said. "These young people are a power for good inside their nations."

Elder Bednar, who served his full-time mission in Germany in 1971, also participated in the rededication, telling Deseret News, "I love these people—I love the country of Germany." He continued, "To come back now to what was, at that time, East Germany, and be invited to participate in this rededication is a dream come true."

Although enjoying his time in his native country, President Uchtdorf also looked forward to coming home to report back to President Monson. He told Deseret News, "The impact of President Monson's prophecy and his service is felt now more than perhaps ever before." 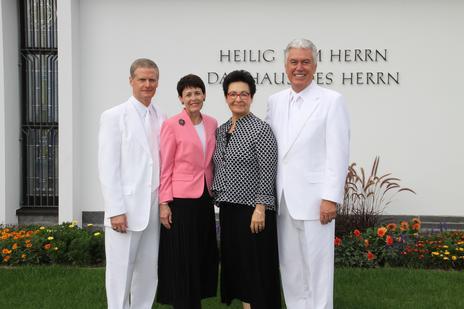