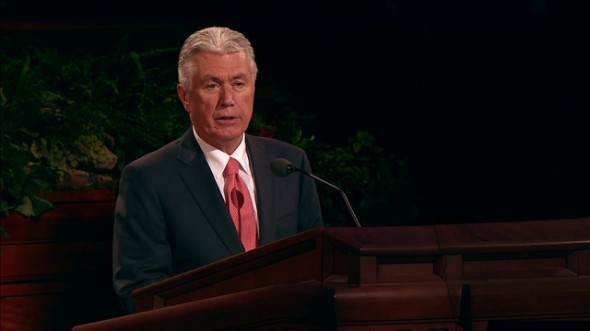 No matter who we are, everyone is susceptible to the pains of adversity. Whether it's the death of a child or neighbors who shun your beliefs, everyone has experience anguish caused by some form of opposition.

In a recent Facebook post, President Uchtdorf shared the incredible story of how one woman overcame adversity and what we can learn from this woman's example of faith even amid heartache.

Thirty years ago in Ghana, a young college student named Doe stepped inside an LDS meetinghouse for the first time. A friend had invited Doe to come with her, and Doe was curious to know what the Church was like. The people there were so nice and warm that she couldn’t help but wonder, “What kind of church is this?”

Doe felt so impressed that she decided to learn more about the Church and its people, who were filled with so much joy. But as soon as she began doing so, well-meaning family and friends began to oppose her at every turn. They said terrible things about the Church and did all they could to dissuade her.

But Doe had received a testimony. She had faith, and she loved the gospel, which was filling her life with joy. And so she entered the waters of baptism. Afterward, she immersed herself in study and prayer. She fasted and sought the influence of the Holy Ghost in her life. As a result, Doe’s testimony and faith grew stronger and deeper. Eventually she decided to serve a full-time mission for the Lord.

After returning from her mission, she dated and married a returned missionary—the very one who had baptized her years earlier—and they were later sealed in the Johannesburg South Africa Temple.

Many years have passed since Doe Kaku first experienced the joy of the gospel of Jesus Christ. During that time, life has not always been sweet for her. She has endured her share of heartbreak and despair, including the loss of two children—the deep grief of those experiences still weighs heavily upon her heart. But she and her husband, Anthony, have striven to draw close to each other and to their beloved Heavenly Father, whom they love with all their heart.

Today, 30 years after she entered the waters of baptism, Sister Kaku recently completed another full-time mission—this time at the side of her husband, who was a mission president in Nigeria. Those who know Sister Kaku say there is something special about her. She glows. It’s hard to spend time with her without feeling happier yourself.

Sister Kaku’s story is similar to that of many others. She had a desire to know the truth, she paid the price to gain spiritual light, she demonstrated her love for God and her fellowman, and along the way she experienced hardships and sorrow. But no matter the opposition, no matter the sorrow, she kept moving forward in faith. And just as important, she kept her joy. She found a way not only to endure the hardships of life but also to thrive despite them!