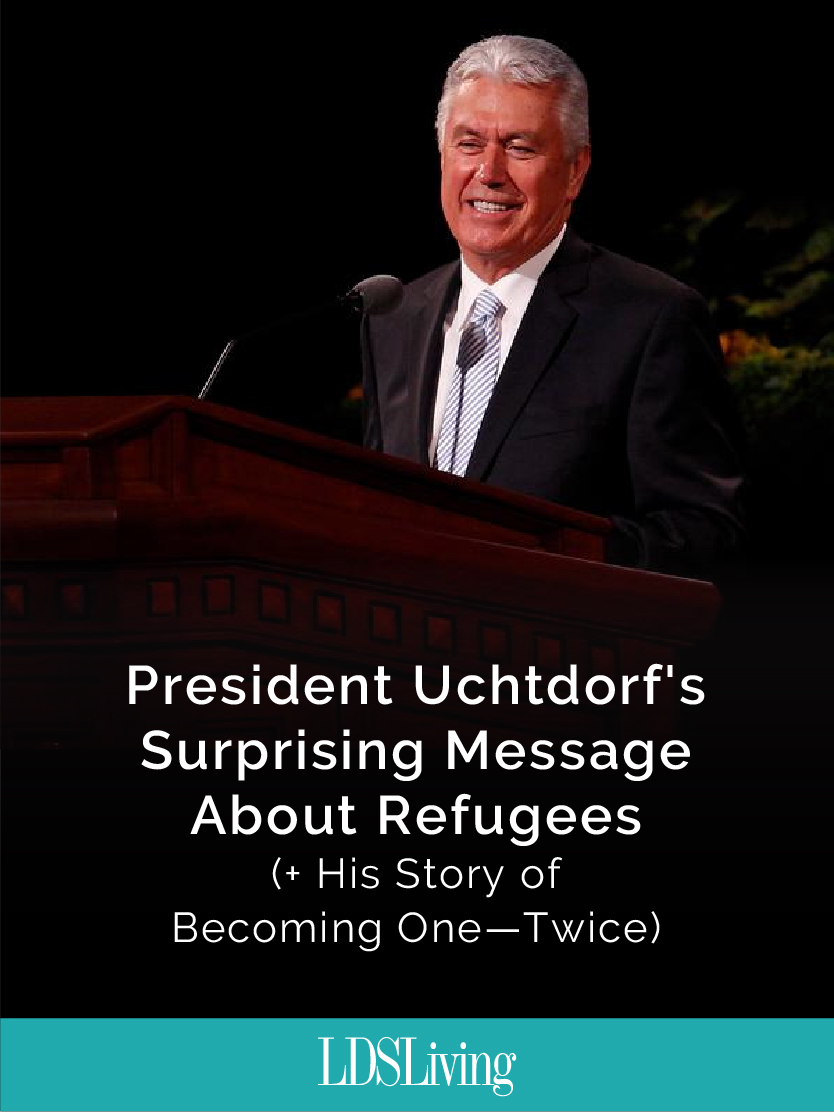 President Dieter F. Uchtdorf was a refugee twice in his life, once as a 4-year-old boy fleeing Czechoslovakia with his family during World War II and later as an 11-year-old escaping from East Germany with his family after the turmoil following the war.

Mormon Channel recently captured both of these fearful experiences in President Uchtdorf's own words with these beautifully illustrated videos that share deeper messages of the gospel:

President Uchtdorf has never been afraid to speak out about his experience as a refugee to uplift others.

In a recent meeting with a branch of refugees in Salt Lake City, President Uchtdorf told members, "For you who are here now, the gospel is home. See that as your goal for the future. . . . The gospel is home for everyone. Trust in the Lord. Keep the commandments. He will be close to you. . . . You will find a home among members of the Church.”

Lessons Learned as a Refugee and Apostle

In an interview with Mormon Newsroom, President Uchtdorf shared some lessons he learned from his experience as a refugee and an apostle.

"There were so many who were willing to help regardless of religion, of race, of background," President Uchtdorf remembers. "And that's what we're trying to do now. . . . If we declare to be Christians in our case as we are—as LDS, as Mormons—there is our responsibility to follow the Savior through our acts, not just through our declarations, and help. . . . We need to reach out irrespective of political aspects and help those in need."

But President Uchtdorf hasn't only learned from personal experience. He has learned from our Church's history as well. After Governor Boggs issued an Extermination Order requiring Latter-day Saints to leave the state of Missouri or be killed, the majority of the Church's membership found themselves suddenly refugees.

“Sometimes as Church members we have to see where we are coming from before we say, ‘We cannot help everyone. There are too many. That is too much. You cannot ask for so much.’ Fortunately, Quincy did not say that. They accepted us.”

Expanding Our Definition of Refugees

While still addressing the refugee crisis, President Uchtdorf expanded the definition of refugees within the Church by highlighting those close to home who might also need our help: “There are also within our own stakes, wards, and branches and our own families some who may feel like emotional, spiritual, or temporal ‘refugees.’ Sometimes we don’t reach out to them because they are so close to us. It is often easier to help those from far away rather than someone in our own families with whom we might have a challenging relationship. We need to reach out to all, close and far, to give Christlike help. We need to learn in this process to recalibrate our own efforts.”

While the political issues and the crises might seem overwhelming, President Uchtdorf reminds us to focus on two, straightforward commandments with regards to refugees and any who need our help, "We are all brothers and sisters. Our two great commandments are to serve God and our fellowman. We are to reach out to those in need and help them—and not just by impressive declarations, but by one-on-one help, eye-to-eye help, by lifting up those who are in need.”

Lead image a screenshot from the Mormon Newsroom video above