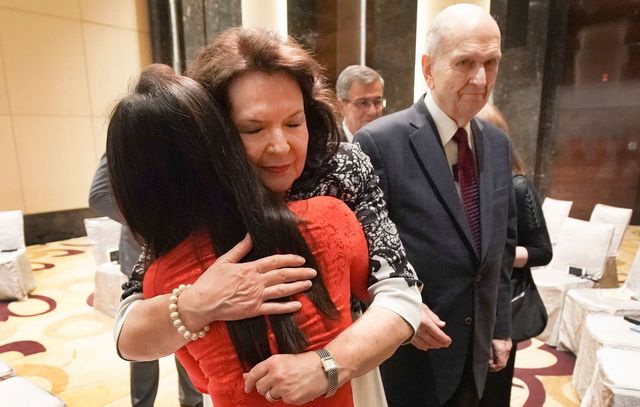 There are approximately 16 million members of The Church of Jesus Christ of Latter-day Saints. As President Russell M. Nelson and his wife, Sister Wendy Nelson, visit Southeast Asia over the next week, they are visiting countries where just 30,000 Latter-day Saints live. President Nelson calls these countries a “vibrant corner of the world, one that has seen plenty of strife through the years but also a region filled with valiant, resilient, determined souls.”

According to Elder David F. Evans, General Authority Seventy and president of the Church’s Asia Area, this is a trip that both the Saints in the area have been looking forward to as well as the Prophet.

“These gatherings will be among the smallest gatherings that he will likely go to during the course of his ministry as President of the Church,” Elder Evans said, after emphasizing that for many of the Saints in Singapore, Indonesia, Vietnam, and Cambodia, this may be a once-in-a-lifetime opportunity. “As we’ve discussed that with [President Nelson] and others, he’s expressed a lot of joy about having the opportunity to be in a somewhat more intimate setting.”

You can learn more about the plans for the Southeast Ministry on the Church News.

President Nelson’s visits kicked off on Sunday morning as he spoke to Latter-day Saints in Hanoi, Vietnam. He recounted the Church’s history in the country, which led to it being officially recognized by Vietnamese government in 2016. On November 14, 2019, another important piece of progress was made for the Church in Vietnam as Madam Thieu Thi Huong of the Vietnam Government Committee for Religious Affairs presented an official certificate authorizing Latter-day Saints to conduct religious activities in the country. President Nelson expressed gratitude in his remarks, expressing appreciation for the Church leadership in the country.

“You’re a part of the solution to the problem rather than being part of the problems. . . . I have great feelings of thanksgiving for you. You are very special.”

President and Sister Nelson are joined on the trip by Elder D. Todd Christofferson and his wife, Kathy. Read more about their remarks to the Vietnamese Latter-day Saints here.