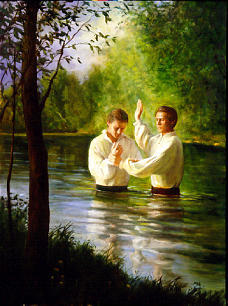 Pull out a map and locate the Susquehanna River where it runs through Pennsylvania. Now find the town of Ayacucho in Peru's southern interior.

Geographically, the two points are a half a world away. But spiritually, they could be neighbors. It was 182 years ago this month that the resurrected John the Baptist appeared to Joseph Smith and Oliver Cowdery north of the Susquehanna and conferred upon them the Aaronic Priesthood, or the "Priesthood of Aaron."

John the Baptist — a descendent of the Old Testament's Aaron — identified Joseph and Oliver as his "fellow servants" and ordained them to the Aaronic Priesthood "which holds the keys of the ministering of angels, and of the gospel of repentance, and of baptism by immersion for the remission of sin" (Doctrine and Covenants Section 13).