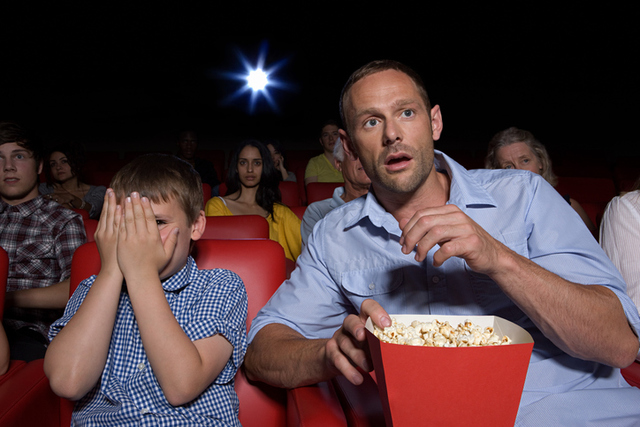 R-Rated Movies: What Have the Prophets Actually Said?

Author’s note: This article is not intended as an endorsement of R-rated movies, or as a criticism of those who choose to either watch or abstain from them.

I once attended a testimony meeting where a man stood and related an experience he had with his co-workers. One day after work, several of them invited him to go see a movie with the group. The film in question was The Wolf of Wall Street, which was critically acclaimed but also contained gratuitous displays of drug use, sexuality, and other mature content. In his testimony, the man announced to the congregation that he had declined the invitation of his coworkers. “I wanted to go,” he said, “but it was rated R.”

Since that meeting, I’ve spent a lot of time pondering the relationship between Latter-day Saints and R-rated movies. Many Latter-day Saints avoid any film with the rating like a plague, believing that it’s against the commandments. Indeed, it could accurately be said that in Latter-day Saint culture, ‘R’ has become the scarlet letter of the movie rating law.

But why is this? It’s been my experience that if you ask a Latter-day Saint why they don’t watch R-rated movies, their response will be some variation of “because the prophet said not to.” But follow-up questions (Which prophet? What exactly did he say? In what context?) aren’t likely to be answered quite so readily. This article will seek to provide answers to these questions, as well as others that may be helpful when selecting what media to consume.

With so much cultural emphasis on movie ratings, it might be surprising that not much prophetic insight (not necessarily given as a specific commandment or as doctrine) has been given about them in a formal setting. In fact, the entire pantheon of past prophets has only mentioned R-rated movies in general conference once—three decades ago, in a 1986 talk by Ezra Taft Benson entitled “To the ‘Youth of the Noble Birthright.’”

As you may have deduced from its title, President Benson’s talk was directed toward the youth of the Church—specifically, the young men attending the priesthood session in which the talk was given. “Tonight I would like to speak directly to you young men of the Aaronic Priesthood,” he started his talk. Then, acknowledging that others were present, he added that he would like the fathers and priesthood leaders listening to hear his message also.

Many of President Benson’s words (admonitions to attend seminary, earn an Eagle Scout award, prepare for a mission, etc.) were not directed to adults, but the parents and leaders present were encouraged to help the youth live by this counsel. With that in mind, take a look at the full quote from President Benson’s talk:

“Consider carefully the words of the prophet Alma to his errant son, Corianton, ‘Forsake your sins, and go no more after the lusts of your eyes.’

‘The lusts of your eyes.’ In our day, what does that expression mean?

Movies, television programs, and video recordings that are both suggestive and lewd.

Magazines and books that are obscene and pornographic.

We counsel you, young men, not to pollute your minds with such degrading matter, for the mind through which this filth passes is never the same afterward. Don’t see R-rated movies or vulgar videos or participate in any entertainment that is immoral, suggestive, or pornographic (emphasis added).”

I find it interesting that the counsel to avoid R-rated movies was directed specifically to youth (six months later, President Benson delivered nearly identical advice to young women), who often need more specific guidelines to aid their decision-making. It’s also interesting that this counsel is mentioned under the umbrella of avoiding media that promotes lust. Given this additional information, we know that this sound, righteous advice was directed especially to youth, but could also apply to their leaders and all who heard the talk.

Rather than nit-picking through these statements and who they were directed at in an attempt to either condemn or justify our decisions, however, it’s better to focus on the why behind it, and make sure that we are not casting judgment on other based on our own specific ways of living the gospel. As President Uchtdorf said in his 2009 conference talk, “The Love of God,” “Sometimes, well-meaning amplifications of divine principles . . . complicate matters further, diluting the purity of divine truth with man-made addenda. One person’s good idea—something that may work for him or her—takes root and becomes an expectation. And gradually, eternal principles can get lost within the labyrinth of ‘good ideas.’”

So what is the eternal principle behind not watching R-rated movies? Going off of what was said before, while we should never look down on others for not following commandments and doctrine, it’s especially harmful to make such judgments when the standard is an individual one and not doctrinal.

In addition to not judging, we need to be careful not to put words into the mouths of our leaders, sometimes spreading “false doctrine” by incorrectly citing religious authorities as the source of cultural taboos we follow like doctrine. In fact, Elder Lynn G. Robbins illustrated this in a 2013 BYU devotional, using Ezra Taft Benson’s remarks on R-rated movies.

“In 1986, President Ezra Taft Benson warned members of the danger of anything ‘R-rated’ or beyond. The members thought he had drawn a line. I know that because I have heard many members of the Church say, ‘Oh, we can watch that movie. It’s only a PG-13. The prophet gave us permission.’ They don’t say that last part, but that is what they are thinking, because they thought he posted a speed limit, so to speak.”

He then illustrated the point with an analogy:

“Let’s assume that the two ends of the basketball court here at the Marriott Center represent the two extremes of movies that Hollywood produces. We will have this end area at my extreme right represent G-rated movies. At the other extreme to my left is what Hollywood calls ‘adult entertainment.’ In between the two extremes, the MPAA gives movies ratings of PG and PG-13. We will have this pulpit represent R-rated, then NC-17, and adults only. In between the two extremes, where do we draw the line over which it would be dangerous to cross?

“It is risky for the Church to draw a line. If the speed on the freeway is 65 miles per hour, how fast will people drive? Well, they will feel free to drive as fast as the limit. If the Church were to draw a line with movies, that would be like giving permission to watch everything up to the line. President Gordon B. Hinckley never drew a line. Neither has President Thomas S. Monson. But the prophets have taught us principles.”

On some level, it’s surprising that we even rely on rating systems to decide what media is appropriate for us to consume. As explained by Elder Robbins, movies are rated by a Hollywood entity called the Motion Picture Association of America, an organization which has been widely criticized for its inconsistency and skewed values. In fact, Latter-day Saints are usually some of the first to lament Hollywood’s negative influence in the world, so why on earth do we put so much stock in what they have to say?

While the prophets have not given a definitive word on the specific subset of R-rated movies, they’ve been loud and clear about what kind of content should be avoided—and the content of a movie is the same regardless of what letter Hollywood puts on the poster. The MPAA gives out ratings on the basis of “mature” content—and “mature” does not necessarily equal “offensive.” This means that an uplifting, inspiring film could potentially be given a restricted rating for containing realistic depictions of war, while a movie that would be inappropriate by Church standards might slide through with a PG-13.

So rather than fervently clinging to a worldly, rating-based line, might it not be more prudent to simply judge a movie by its content? This is more possible than ever in the internet age; the websites IMDb, ScreenIt, Kids-in-Mind, and OK.com are just a few of many resources that allow users to know beforehand about any objectionable content a movie contains. These solutions are a simple way to meet your own personal standards as you decide what media to consume, and Hollywood has nothing to do with it. Focusing on content instead of rating will remove a dangerous, culturally-imposed line and replace it with a method of discernment far more aligned to both the letter and spirit of prophetic counsel.

As I’ve pondered over this issue, I realize that it was probably wise for the man in the testimony meeting I attended to avoid seeing The Wolf of Wall Street, but I hope that his decision was based on the film’s content, and not simply on its rating. Joseph Smith was once asked how he was able to effectively govern so many people—he responded, “I teach them correct principles and they govern themselves.” We should not allow a worldly rating system to govern us, nor should we allow ourselves to govern others—but the prophets have taught principles, and we should now govern ourselves. As a culture, we can and must develop a greater sense of spiritual self-reliance.